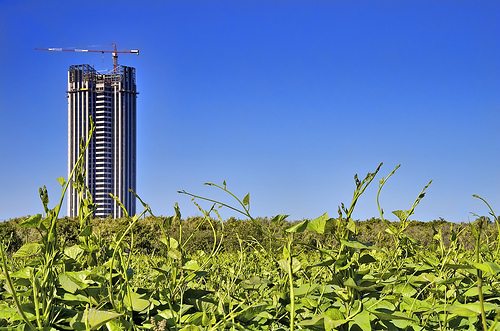 In the US for example, the American society of Civil Engineers estimate a $2.2 trillion infrastructure repair bill, giving the quality of infrastructure a ‘D’ overall.

In the past, government and private actors have automatically turned to traditional ‘grey’ infrastructure to solve these problems. Now, local, regional and federal government, innovative non-governmental organisations (NGOs), thoughtful engineering and construction firms, and private investors and entrepreneurs are forging new approaches that use hydrological and natural processes rather than concrete and steel.

The US Environmental Protection Agency (EPA) has amassed extensive research that shows that ‘green’ or ‘natural’ infrastructure solutions are less expensive than grey ones, and have a wide array of co-benefits for local economies, the social fabric, and the broader environment.

Cities are looking out for innovative partnerships to execute these ideas, and NGOs and the private sector are responding with powerful new ideas.

For example, the city of Philadelphia in the US is attempting to catalyse the implementation of natural infrastructure by changing policies to allow a reduction of taxes for commercial property owners who use green infrastructure to reduce storm-water runoff from their property.

Interventions like green roofs (plants on roofs), blue roofs (roofs that collect water), stream side restoration, and permeable surface areas for parking lots, driveways etc are far more cost effective on a per unit basis in reducing storm-water than building massive tunnels under cities and piping and filtering water during storms.

The Rockefeller Foundation has provided grant financing to non-profits the National Resources Defence Council (NRDC) and the Nature Conservancy to work with environmental asset manager EKO to develop private financing mechanisms for these efforts in Philadelphia. A study published by NRDC and EKO suggests that there is a $370m private investment opportunity on commercial properties in Philadelphia alone.

Additional research has shown the need for several hundred billion dollars of storm-water management infrastructure – it appears possible that much of that could be directed to green solutions and could be privately financed if these efforts in Philadelphia are successful.

There are natural infrastructure financing solutions being developed for pressing infrastructure problems such as using payments for watershed protection for cleaner water in places like New York City, Columbia and Ecuador.

In the UK, the use of green infrastructure has also emerged most strongly in the water industry. South West Water, part of the Pennon Group, has established itself as a leader through its Upstream Thinking programme. Much like the US initiatives, the objective is to use natural ‘infrastructure’ – in South West Water’s case in the form of upland bogs and improved land management, to reduce the need for new storm water capacity, reservoirs and water treatment.

The commercial benefit of the programme is to defer or even avoid capital investment. According to South West Water, an investment of over £6m from 2010-2015 will enable the company to avoid capital costs, associated interest charges, and operations and maintenance expenses that would be 60 times this figure up to the year 2030.

These figures are pretty remarkable, but it is still early days in realising the potential of green infrastructure. In these straitened times, building ‘green’ rather than ‘grey’ infrastructure may prove to be the cheaper and more sustainable approach.

Ben Goldsmith is a partner at WHEB. This article originally appeared in the first issue of WHEB’s magazine, WHEB Quarterly, which is published every three months.