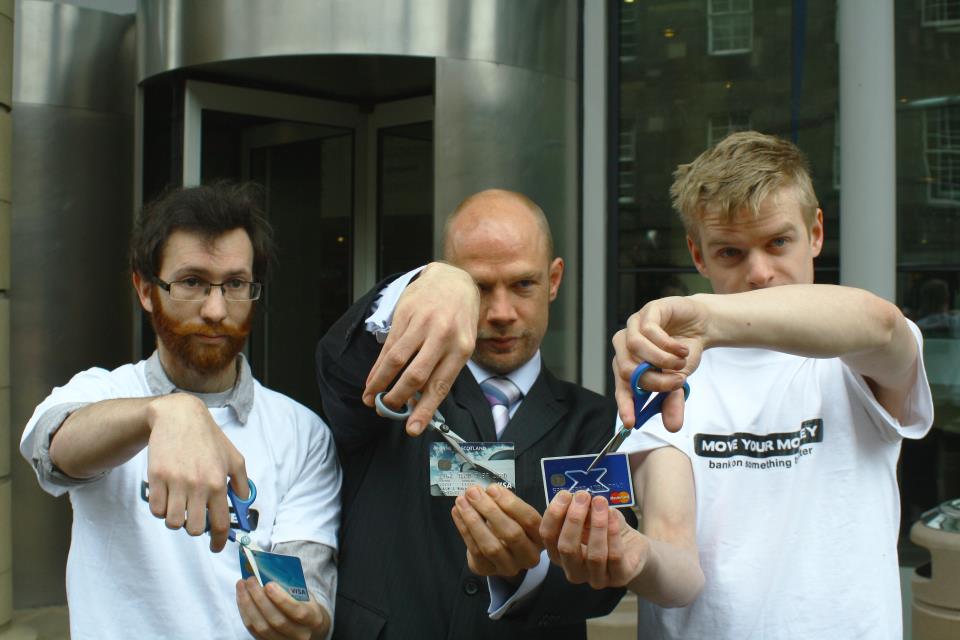 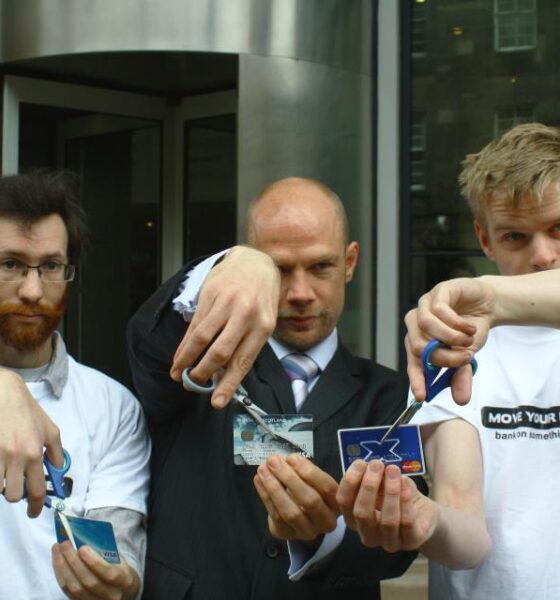 With Christmas just days away and a new year around the corner, why not treat yourself to a brand new, ethical, sustainable, responsible and better bank account. With help from our friends at Move Your Money, here’s Blue & Green Tomorrow’s rundown of Santa’s naughty and nice banking list.

Since January, campaign group Move Your Money claims over half a million people in the UK have made the switch from high street banks to dedicated ethical alternatives – not least because of the scandals and crises that have continued to engulf the mainstream banking arena.

The thriving alternative sector – that can be typified by its transparency, its innovation, its personal customer service and its search for positive change – is growing at a rate of knots, and there are options suitable for everyone, whether it’s an ethical bank, building society, credit union or community development financial institutions(CDFI).

“As we leave 2012 with banks being fined for laundering drug money and exposed for mis-selling, it is really time we all showed banks who is the boss of our money”, said Laura Willoughby, Move Your Money chief executive.

“Do you have an account at a naughty bank? Watch our Christmas message and see if you can move your money in the new year.”

You heard her. Watch the video below and see if you can spot your bank being given a surprise – and perhaps unwelcome – Christmas gift by Santa.

Just in case you’re still unsure as to which camp your bank is in, we’ve compiled a couple of handy lists – or should we say, we’ve got hold of Santa’s official naughty and nice banking lists, and the North Pole has kindly allowed us to share it with our readers.

So without further ado, here goes.

– Barclays: It’s been a really bad year to be a Barclays customer. Not only did the bank find itself at the centre of the Libor rate-rigging scandal – for which it was subsequently fined £276m – but it also witnessed a shareholder revolt at its annual general meeting in April over its boardroom pay strategy, with a significant 26.9% rejecting Barclays’ executive remuneration package. It was pulled up for “aggressive” tax avoidance in 2012 and was even recognised (or ribbed) in January at the Public Eye Awards for its “social and ecological offences” relating to food speculation.

– HSBC: HSBC’s inclusion on the naughty list was sealed when accusations of money laundering began surfacing. After an investigation by the US Senate, the bank was forced to pay £1.2 billion in penalties for channelling money for Mexican drug barons and Iranian criminals – the largest fine ever given to a bank. Blue & Green Tomorrow’s editor – a customer of HSBC since the age of seven – jumped ship for pastures new earlier this year, and wrote about his reasons for leaving recently (if it wasn’t already painfully obvious).

– Lloyds TSB: Lloyds Banking Group, the parent company of such banks as Lloyds TSB, Halifax and the Bank of Scotland, revealed a half year loss of £439m in July this year after being forced to increase the amount it had set aside for payment protection insurance (PPI) compensation by £700m to £4.27 billion overall. But for 4.8 million lucky Lloyds TSB customers, The Co-operative Bank struck a deal in July to buy 632 Lloyds TSB and Cheltenham and Gloucester branches in the UK, in what was described as the “biggest shake-up in high street banking in a generation”. We say bravo, Co-op, for ending those people’s misery without them having to lift a finger.

– Royal Bank of Scotland: Although it’s not been officially agreed yet, the Royal Bank of Scotland (RBS) is in line to receive the biggest Libor fine of all UK banks to date at £350m. It has also received continued criticism in the last 12 months for its funding of Canadian tar sands operations. This is on top of a £1.5 billion half year loss and a PPI compensation pot worth £1.7 billion. Phew; we’re worn out just writing this one.

– Natwest: The inclusion of Natwest on the naughty list centres mainly on its horrendous IT meltdown over the summer. Up to 12 million people were estimated to be unable to pay bills or withdraw money during one of the worst technical failures in banking history. The Financial Services Authority (FSA) subsequently ruled that the bank had to refund and compensate affected customers – and rightly so. Emma Fay, an English student and teacher from West Sussex, wrote about her motivations for ditching Natwest back in June.

– Triodos Bank: Triodos is a pioneer in ethical banking. Its managing director Charles Middleton told Blue & Green Tomorrow how it had got through the global financial crisis unscathed because of its robust, resilient and sustainable business model. While the big banks are paying fines and compensation for various scandals and crises, Triodos reported a 51% surge in account applications around the time former Barclays chief Bob Diamond handed in his resignation. It announced last month that it was extending an investment offer after witnessing “unprecedented” interest from investors, who had already raised over £1.7m to fund the bank’s future growth. And it also reported a 36% growth in green lending in 2011, proving that banks can indeed be good and do good.

– Charity Bank: Rather fittingly, Charity Bank turned 10 years old right in the middle of National Ethical Investment Week this year. In that decade-long period, it has issued 1,006 loans, valued at a total of £165m, and supported project expenditure of £353m. This, in turn, is estimated to have improved the lives of some 3.5 million people across the UK. Its chairman George Blunden summed the bank up perfectly: “There are banks out there that are trying to use finance as a tool to make the world a better place. Charity Bank is one of those.”

– Reliance Bank: Reliance Bank typifies the small and vibrant banking community that wrongly gets overlooked in the UK. Set up over 100 years ago as The Salvation Army’s bank, it has grown sustainably over the years to the point where now 75% of its operating profits go towards the charity’s community work in the UK and overseas. Customers therefore know exactly how their money is being invested – something that is almost unheard of on the high street – and more to the point, can sleep easy knowing they’re making a positive difference.

– Unity Trust Bank: Unity Trust Bank is another institution that has been able to continue with business-as-usual, despite the global financial crisis. When we spoke with its managing director, Richard Wilcox, he outlined the bank’s distinctive standpoint in the market: “We have a unique understanding of [the] social economy because we’re part of it. It’s not like we’re an outsider looking in – we’re part of that economy.” How many mainstream banks can honestly say that? We’d bet none.

– The Co-operative Bank: Arguably the closest thing to a high street bank that the alternative banking sector has. The Co-operative Bank has gone from strength to strength in the last 12 months – revealing in July that it would be taking on an extra 4.8 million UK customers after acquiring over 600 Lloyds TSB and Cheltenham and Gloucester branches. It was also named European sustainable bank of the year at the FT/IFC Sustainable Finance Awards in June, and was our editor’s preferred destination when he left HSBC.

– Ecology Building Society: This one’s somewhat of a wildcard choice in the nice list, purely because it’s not technically a bank – but a building society. But we – ahem – Santa thought that it would be wrong and unfair to leave out such an excellent institution. With sustainability and environmentalism etched into its very DNA, Ecology Building Society engages its members to play a prominent role in its development. “For everything that we do”, its chief executive Paul Ellis told us, “we must be able to point back to a sustainability gain”. So if protecting the environment is high up on your agenda, Ecology would be a perfect match for you.

Have you found your bank yet? If not, and you’re still wondering whether you’re with an ethical or unethical institution, simply do a quick Google search for your bank’s name, followed by ‘controversy’. That’s sure to pull up some thought-provoking stuff – if you’re with an unethical one, that is.

All five banks and one building society on the nice list (along with Move Your Money) feature in Blue & Green Tomorrow’s Guide to Sustainable Banking – a rundown of the best, ethical, sustainable and responsible banking options in the UK. But there are hundreds of other similarly excellent alternative options for you to choose from.

We hope you make the right decision.