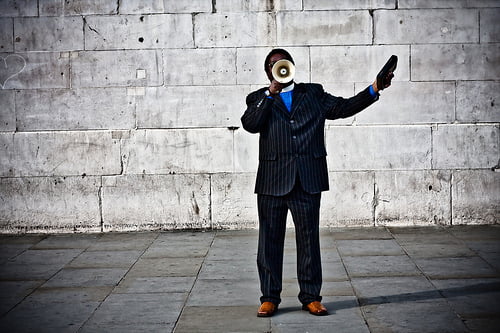 What links geocentricists to tobacco/cancer link deniers and to the current crop of human-caused climate change deniers? There have always been vested interests, which will do everything in their considerable power to protect the status quo and bend facts to their version of the truth.

Those who denied the Earth orbited the sun had to use enormous lobbying, the might of the Catholic church and perform incredible leaps of imagination to make evidence fit their version of the truth. Eventually the weight of evidence became so overwhelming that the lie was exposed for what it was: dogma, pure and simple, masquerading as the truth.

The same denial mentality has been at work in tobacco and its link to cancer since the 1950s. And it is alive and well today with climate change. Worryingly, it is often the same people and money being recycled for the latest denial cause.

This is how it seems to work today.

Research is conducted by a plausible sounding thinktank, often with ‘Institute’ or ‘Trust’ (without any irony) in the name, which is funded by a cancer merchant or pollutocrat*. The same thinktank produces academic sounding white papers under some credible banner.

A ‘quality’ newspaper owned by a sympathetic billionaire then publishes the story as ‘fact’. Other media outlets pick up the story and run with it, creating layers of credibility and a media storm. Sympathetic rentaquote ‘experts’ are brought in to add even more credence to the original lie.

A grassroots movement coalesces, consisting of the most vocal if not the most coherent or informed, with generous donations from cancer-pollutocrats.

In response, another plausible sounding thinktank is funded and launched by the cancer-pollutocrats, because “government isn’t responding to overwhelming public opinion and research”. It produces more white papers under some academic banner.

Another media empire owned by another sympathetic billionaire then publishes the story as ‘fact’. Other media outlets pick up the story and run with it, creating more layers of credibility and another media storm. Sympathetic rentaquote ‘experts’ are brought in to add even more credence to the original lie.

The grassroots movement becomes more outraged, more vocal and more extreme, capturing more column inches than the tiny percentage of the population they represent. Extremists and polemicists make good telly; the reasonable and moderates are dull.

While this is really a battle of the unenlightened few against the enlightened many, this is all made to look like a battle between the ordinary person against an overbearing, metropolitan and liberal elite. “Those scientist with their ‘theories’, trying to oppress us all.”

Soon, deniers with nothing more than a degree in writing are elevated to the same level of those who have spent years, lifetimes even, carefully weighing climate science and gently advising governments on the balance of probabilities. All in the vain hope that cooler heads will prevail and our policymakers will listen to reason over prejudice, free thinking over dogma, science over money.

Before long, it is very hard to distinguish between fact and disinformation created by vested interests and spread by their friends in the media and politics. A perfect self-reinforcing feedback loop has been created that turns fiction into seemingly well-sourced facts.

What is at stake for corporations and billionaires is their massive investments in the status quo, who do not see transparency, sustainability diversity or the community in the economic model. What is genuinely at stake is our planet, its people and all of our prosperity.

Ultimately, we may lose the fight. Cancer-pollutocrats have most of the cards and will screw every percentage of profit out of the planet and its people. With no moral compass or ethical restrictions, they have the recklessness of a zealot, the fearlessness of the faithful. But their god is profit, at any cost.

We have argued that climate change is our generation’s slavery. How we respond to this enormous challenge, even if we lose the fight, will be how future generations will judge us.

Let’s not lose the fight.

* With thanks to BusinessGreen for this excellent portmanteau.