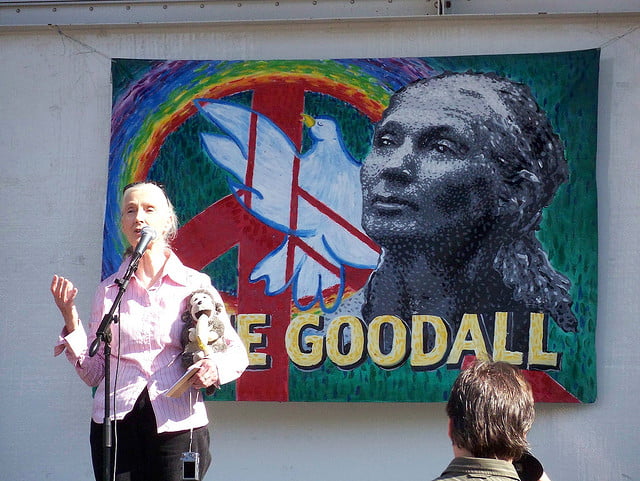 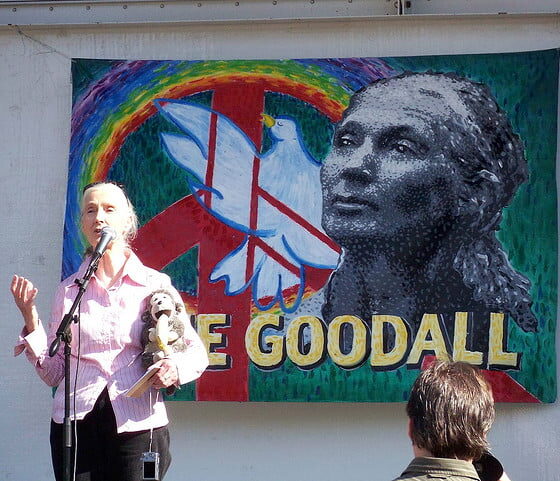 Dame Jane Goodall is a world-renowned pioneer in the study of chimpanzee behaviour, a UN messenger of peace, an ethologist and an anthropologist – one who has made fascinating advances in our perception of the connection between primates and humans. Today, on Goodall’s 79th birthday, Emma Websdale looks back on her career.

Born on April 3 1934, Jane Goodall began her lifetime passion for nature at an early age. Reading everything she could find about Africa, she became lost in titles including Tarzan and Dr Dolittle, and dreamed about venturing into the exotic plains of Africa – a goal that she never gave up pursuing and would eventually achieve.

When asked at the Wildscreen Festival in Bristol last year where her fascination for nature had come from, she replied, “Well apparently I was born that way – from the time I could first crawl around I was watching insects and whatever I could find.”

And when asked later on whether she was concerned that Africa would be a difficult place to live and visit, she said, “No, it was home.”

In the summer of 1960, Goodall arrived in East Africa where she met Louis Leakey – a British archaeologist and naturalist who focused on human evolution. Leakey decided to send her to Gombe to study the behaviour of chimpanzees, in the hope of gaining better insight into our ancestors.

There, Goodall became one of the first humans to become accepted by a chimpanzee troop, which she described as one of the “proudest and most exciting moments” in her whole life.

Not long after, she experienced another exceptional moment – when a wild chimpanzee mother allowed her baby to reach out and touch her.

Goodall told Wildscreen delegates, “I was sitting on the peak as I did for hours every day; I looked across and a chimpanzee climbed up a tree with something in its mouth. It looked as though he was licking this pink thing and my binoculars just weren’t powerful enough, and I really couldn’t see.

“But there were a couple of bush pigs down below and when a juvenile would climb down the tree, one of the pigs would charge at the child, and I put two and two together and thought that this must have been a little pig.

“I wasn’t positive the first time. The next thing I saw was a chimpanzee hunting a red colobus.”

Goodall’s long-term research of chimpanzees has shaped the scientific thinking about the relationship between humans and other primates. She has always felt passionate about the fact that animals have their own minds and feelings, after growing up with her dog Rusty, and feels that observing the behaviours of chimps has helped her gradually persuade more and more people that we are all part of the animal kingdom.

“These chimpanzees living their complex lives in the wild have helped more than anything else to make us realise we are part of and not separated from the amazing animals with whom we share the planet” , she told a TED conference in 2007.

From watching chimpanzees bully both other chimps and humans, and observing chimps being jealous of newborns, she gently opposed the disciplined scientific theory that said animals didn’t have emotions.

Over the past 45 years, Goodall herself has evolved – starting out as a committed scientist who had written books and papers to a passionate conservationist and humanitarian.

The start of her transition began during the publication of her first book. She went as a scientist to a conference called Understanding Chimpanzees which incorporated a session on conservation. It was during this session that she learnt about the shocking practices occurring in Africa. She left the conference as an activist.

“From that day in October 1986, I haven’t been more than three weeks consecutively in one place”, she says.

Travelling around Europe, Asia and North America, she educated people on the destruction of the chimpanzee’s habitat, learning along the way that not only was Africa’s biodiversity suffering, but also its people. The focus of her education shifted from chimpanzees, to African community development and wildlife conservation.

“The next step was in 1994 when I was flying over the whole Gombe area and the land surrounding it, and being so shocked that the deforestation outside the park was virtually total”, she said at Wildscreen.

“If we are arguably the most intelligent beings to have ever walked the planet, then how come we are destroying it? It doesn’t make sense; we have seemed to have lost wisdom.”

During a TED Talk, Goodall added, “I have got three little grandchildren and every time I look at them and I think how we’ve harmed this beautiful planet since I was their age, I feel this desperation and that lead to this programme called Roots and Shoots.”

Roots and Shoots originated with just 12 high school Tanzanian students who were angry at the government  for not punishing poachers.

Today, it works across hundreds of schools, inspiring young people to take action for people, animals and the environment. The organisation also raises awareness for the need of chimpanzee conservation and community development. Its projects in Africa have helped local people take charge of the conservation and development of their own communities, whilst helping the chimpanzees who they live alongside.

Goodall has also set up the Jane Goodall Institute, which provides great conservation efforts to the protection the chimpanzees of Gombe National Park in Tanzania.

Over Goodall’s fascinating career she has become an internationally recognised author, the president of Advocates for Animals and serves as a United Nations peace messenger.

She is a brilliant role model who has received justified honours and praise from international governments, non-profits and universities. We thank Jane Goodall – for being an inspiration to Blue & Green Tomorrow, but also for helping to change the way society perceives animals.