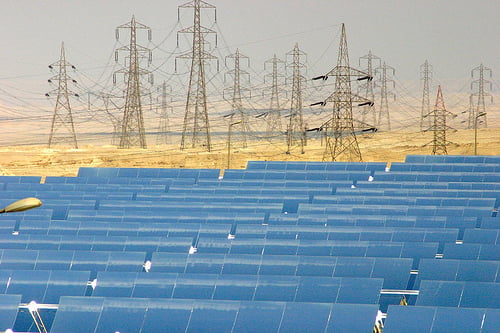 At an event hosted by Ingenious Clean Energy, renowned environmentalist Jonathon Porritt asks whether we’re at the point at which our circularity with energy gets broken, and where we really do start to do things in a very different and cleaner way.

I have a few bits of bad news to start with. This year, we’ve witnessed the worst ever, fastest ever and most profound melting of the Arctic sea ice. Every summer, the sea ice melts away a bit and comes back again in the winter, but this year, it’s the deepest, most profound melting we’ve ever seen. Scientists are now shocked, not just surprised or concerned, but shocked by the degree to which these things are exhilarating.

Five years ago, climate scientists predicted the Arctic would be ice-free from about 2050-2060. Now it’s predicted to be 2020-2025. The speed of the change is utterly extraordinary, which is why scientists are deeply concerned.

There have been profound droughts in America, Russia and the Ukraine, which are now impacting on food prices across the entire world. The increase in average food basket in the UK is £5.62, and in 2013 it will get a great deal worse. And that awful sight is of course linked to the terrible weather here in England.

The funny thing is, the stories about the Arctic, the Corn Belt in America and the wretched summers in England are all connected. Because as the Arctic gets a little bit warmer, it changes the flow in the jet stream which makes the central belt in America warm up and creates what will now reliably be known as the English monsoon. Nobody has yet done an economic calculation of what happens to the British tourism industry when this becomes an on-going reality; not just another bad year.

I’m almost at the end of the bad news. Every year in India, three monumental coal-fired power stations are built. When the country launched onto the capital market around the world two-and-a-half years ago, there was literally no limit to the amount of money it was able to go out and raise. And one of the reasons we are not doing as well as we should be is because the incumbent power brokers in our economy are still incredibly powerful and able to dominate the way in which capital markets work. This is really our challenge, and that is all down to politics.

Now onto the better news. Dr Nawal Al-Hosany is director of the Zayed Future Energy Prize in Abu Dhabi. I was there a couple of weeks ago and I went to visit what is the world’s largest concentrated solar power plant in the middle of the Abu Dhabi desert. You have to suspend your sceptical approach to this for the moment because of course; under our feet is a vast sea of oil, producing enough revenue to allow Abu Dhabi to invest in concentrated solar power plants which are actually quite expensive.

It’s an astonishing thing, though: 120km of nonstop parabolic troughs. The cleaning machine takes a day and a half to get round it. It will come on stream properly at the end of this year. It’s a staggering piece of engineering; it’s beautiful. We could only stand next to it for so long, because the temperature was just so hot. It was incredible.

What Ingenious Clean Energy is doing is inviting people to get really excited about what the technology pipeline looks like for a genuinely sustainable, fair world over the course of the next few decades, and there is literally no limit to the excitement you should have.

We’re a bit more familiar with the standard roof-mounted PV; it’s still a bit of an oddity here in the UK as not many people have done it, relative to the total population. But in Germany, it’s pretty much standard across rooftops. Unfortunately, the way we do things in this country tends to increase regulatory and political risk whereas in Germany and other countries, they managed that risk really well and created a completely different situation.

The UK government in its wisdom has decided that the maximum amount of solar energy we can ever get in the UK, despite the fact that our climate is not that different from Germany, is 22 gigawatts. Nobody knows where that figure came from, and I’m sure it will disappear in due course, but it just shows you how weirdly arbitrary and completely dysfunctional our politicians are. This is not a good scene from a regulatory risk unfortunately.

The pipeline of innovation in all of these technologies is bulging to a degree that you can barely imagine. The irony of this is that our scientists and technologists around the world read the rumours about climate change a good decade ago, and at that point a flow of investment into new technology began to work its way through universities and start-up entrepreneurs, and people began to say that our energy future was going to look very different by 2020-2030.

And at exactly the time when the politicians seem to be stepping back, the pipeline is getting fatter and fatter. Not just for energy; for transportation, waste management, water, soil structure, managing soils properly, building materials and construction. Every bit of what a sustainable world is about has this incredible interconnection of new technology and innovation coming forward, and once we get our heads around how incredible that will be, I tell you, it’s a wonderful world.

I’ll leave you with my last thought. We’ve been talking about this revolution for a long while. In Japan right now, because of Fukushima, they’ve had about 35% of their total electricity generation capacity taken off grid. Can you imagine what would happen in the UK if we lost that percentage of our total generated capability? Japan is now going through a change process which no OECD country has gone through, in conditions of similar stress since America was hit by Pearl Harbour.

It’s fascinating what’s happening there; huge investment in energy efficiency, which they were always brilliant at, renewable energy, which they were always rubbish at, and energy storage, which nobody has got the hang of as yet but is actually the thing on which the whole renewable energy revolution depends on. Out of trauma comes extraordinary inspiration and a different spirit, and they don’t have a choice about it; they probably wouldn’t have done it if it wasn’t for what happened at Fukushima, because they rather like their nuclear power but they couldn’t do it that way any longer and that’s a country on the move.

This is an edited version of a speech made by Jonathon Porritt, who was speaking on October 17 at an event hosted by Ingenious Clean Energy.