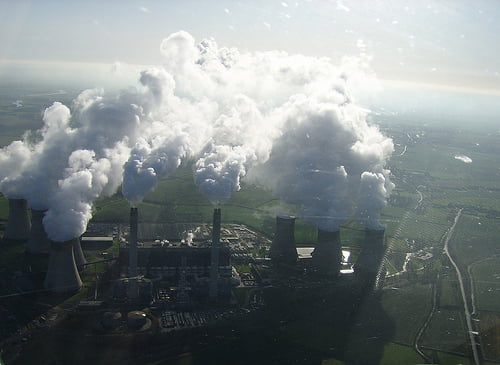 Discovering that you’re being sued for £5m by a gigantic, state-owned, multinational corporation is a pretty overwhelming experience; particularly when you realise that this is a company that makes an annual profit of £1.7 billion by ruthlessly pursuing vulnerable customers who are struggling to pay their energy bills.

But this is the colossal lawsuit facing myself and my friends from No Dash for Gas, who shut down West Burton power station, EDF’s new gas-guzzler, in a record-breaking week-long occupation last November. West Burton is just the first in a looming wave of 40 new gas-fired power-stations, which the Committee on Climate Change has warned will bust our climate targets.

As I explained on this website shortly after the occupation, our action was a response to the environmental and social destruction wreaked by companies like EDF and a government that permits them to do so.

With our energy concentrated in the hands of incredibly powerful multinationals, which regularly second staff into the heart of government, there is a terrifying democratic deficit facing the public, who clearly want a real say in how this most vital utility is owned and produced.

Yet what we currently have is an energy system that delivers short-term profits to a few, while leaving the rest of us out of pocket and horrified by the destruction of our environment. Contrast this with Germany, where the profits from municipally owned renewable energy are ploughed back into public services.

EDF’s decision to sue No Dash for Gas is clearly an attempt to stifle democratic dissent, but represents a huge own goal. Since we released the details of their lawsuit in The Guardian and on Channel 4 News, there has been a stirring in the environment movement that hasn’t been seen since the heady days of Climate Camp, when attempts to build a new wave of coal power stations and a third runway at Heathrow were firmly stopped in their tracks.

So while EDF may think that it’s teaching climate activists a crucial lesson in cause and effect, what it is actually achieving is a confrontation with civil society that will leave its reputation in tatters.

Already, organisations including Greenpeace, Friends of the Earth, People & Planet, Platform and War on Want have written to The Guardian outlining how “EDF’s decision to take out a £5m lawsuit against a handful of climate activists represents a new low in corporate attempts to stifle democratic dissent”.

Solidarity actions are already being planned by other groups and hundreds have flocked to EDF’s Facebook page to express their outrage.

Our attempt to draw the public’s attention to EDF’s (un)civil action is not motivated by self-pity or shock. We know that companies like EDF are used to getting their own way and don’t like it when they’re challenged. But what it’s attempting to do should concern us all, whether you think we should get our energy from renewables, gas, coal or algae.

Some of the most significant social and environmental changes ever to occur were the result of people taking direct action by putting their bodies on the line. EDF is trying to make it even harder for people to do so.

Lawrence Carter is a protester with No Dash for Gas.