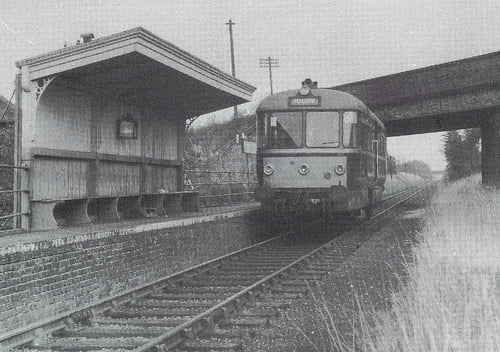 Declaring half of the British railway network as uneconomic and underused, Dr Richard Beeching’s shortsighted report tolled the death knell for the UK’s leadership in rail transport. The same dogma and lack of vision blights our transport system, economy and environment.

The railway network in Great Britain is the oldest in the world. At its peak before the first world war, the network had around 5,000 stations and 23,000 miles of track. While considerable effort was put into trimming the system’s least used lines between the 1920s and 1960s and the modernising of the rolling stock from steam to diesel and electric engines in the 1950s, annual losses had mounted to £104m by 1962. The system at that time consisted of 18,000 miles of track.

Today the network consists of 2,552 stations, 9,789 miles, is the 18th largest network in the world, is one of the busiest in Europe and the fifth most used on the planet.

Beeching’s report, The Development of the Major Railway Trunk Routes, proposed the closure of a further 4,500 miles of trunk lines and focus on nine main routes for future investment and development.

The failures of Beeching’s reports were two-fold. The rail network is just that: a network – interconnected and dependent on each of its parts.

Trunk lines acted as feeders to mainline or railhead stations. Once the trunk lines had gone, commuters were just as likely to continue journeys by car to their final destination rather than park at a railhead station and switch to a mainline train to finish their journey. The savings from the cuts were tiny and losses continued to mount.

Secondly, operating in the 1960s at a time when environmental thinking was in its infancy, he could not have foreseen the damage that the growth in personal car traffic would do. Nor could he see how the rising prices of fuel and insurance would eventually end our love affair with the internal combustion engine.

There was also a failure of political leadership. The transport minister, Ernest Marples, was a powerful business magnate associated with the Marples Ridgway construction group, which built motorways. When opening the M1 motorway he said, “This motorway starts a new era in road travel. It is in keeping with the bold scientific age in which we live. It is a powerful weapon to add to our transport system”. No bias or vested interest there, then.

Critically, the board that reviewed the Beeching proposals contained no one with any previous knowledge of the railway industry, but many executives, who would see the private benefit from the subsequent sale of unused vast swathes of land and valuable urban structures.

This same mix of vested interest and technical ignorance is guiding our energy policy. The parallels are terrifying, with a third of ministers linked to anti-climate industries and leading politicians denying the scientific consensus on climate change.

The cuts gradually came to a halt in the 1970s.

Margaret Thatcher was minded to push forward the proposals of a Beeching colleague, Sir David Serpell. His plan A would have closed 84% of what was left of the network leaving just under 1,700 miles and reducing passenger miles by 56%.

Had that plan succeeded the only lines that remained would have been London to Cardiff via Bristol, London to Edinburgh via Birmingham/Liverpool/Manchester and Glasgow and London to Newcastle via Leeds. Obviously, some lines in the south east would be maintained.

An outcry from rail users and MPs prevented the government from taking up the proposal, but several minor and duplicate lines were subsequently closed.

We can only imagine the parlous state of our roads nationally and the economy in the south west and Scotland had Maggie agreed to the proposal.

Passenger numbers picked up through the mid to late 1980s, reaching a 20 year high in 1988 and rising ever since. 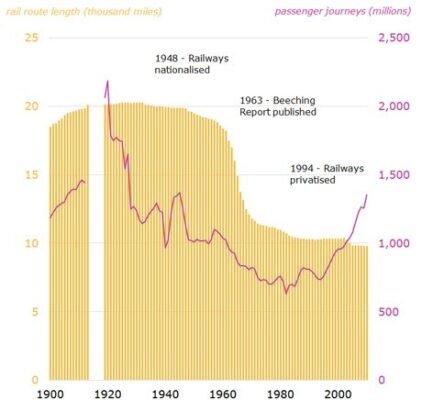 It is often said that since privatisation, numbers of passenger have grown rapidly.

This is misleading. As described above, the growth began in the 1980s. Privatisation has done more to hamper growth, degrade the network further (leading to the eventual collapse of Railtrack) and create a dysfunctional timetable between Train Operating Companies.

The impact of Beeching’s butchery has been far-reaching and disastrous.

We lost forever our leadership in rail transport just as passenger numbers were about to rise nationally, but more importantly, globally. Britain invented the railways but has no domestically owned manufacturer of this form of transport.

The road network had to expand to cope with the growing number of road users. Freight also moved onto the roads meaning the existing roads degraded faster leading to semi-permanent road works.

As we argued in The budget speech we want to see, we see rail as a key part of our national economic renewal and weapon in our fight against climate change. Renationalising the network commands overwhelming public support. Alternative ownership structures could be explored, where those who use and work on the railways could own the service through some mutual structure.

Accelerating Eastcoast Mainline’s re-privatisation, which has contributed £600m in premiums and profits to the state’s coffers under public ownership after the failure of two private franchise operators, runs contrary to the public good or public opinion, and smacks of ideology over common sense.

We could reclaim our role as a world leader in rail transport if we chose to.

Beeching was unrepentant about his role in the closures, “I suppose I’ll always be looked upon as the axe man, but it was surgery, not mad chopping.”

No, he was a butcher.