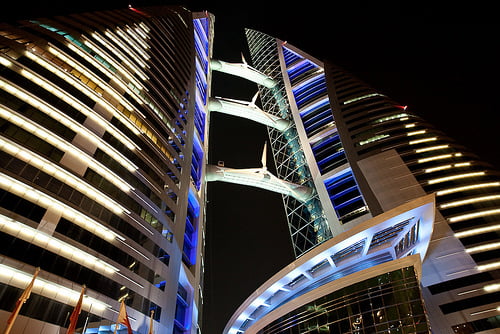 On this day in 2008: world’s first wind turbine-integrated building opens

Today is the fifth anniversary of the opening of the Bahrain World Trade Centre – the first building in the world to integrate wind turbines into its structure.

Its three turbines, which sit across beams (or ‘skybridges’) connecting the building’s two towers, were manufactured by Danish firm Norwin. The design of the building itself was tailored to optimise the performance of the trio of turbines (by as much as 30%, architects said).

The three turbines generally produce between 11-15% of the Bahrain World Trade Centre’s energy when running at full capacity. This equates to between 1.1-1.3 gigawatt hours annually.

Although the turbines might look complex, little work was needed to convert the technology used for regular wind farms into the spectacular looking design the residents of Manama, Bahrain’s capital, see on a daily basis.

The sustainable design outlines to brilliant effect how renewable energy can not only bring economic and environmental benefits, but it can also turn a building into something wonderful for the eyes.