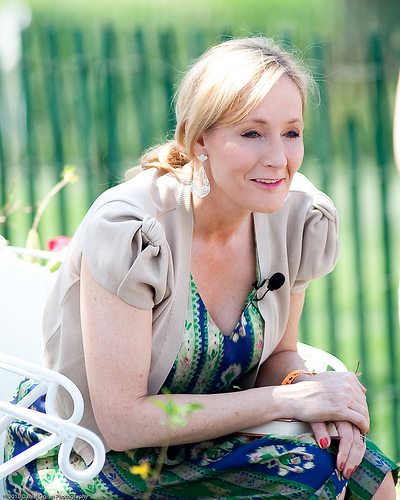 News that JK Rowling is to write a new film in the Harry Potter universe, based on the in-book book Fantastic Beasts and Where to Find Them will have delighted her millions of fans, and dismayed her critics. We were going to call this article, Harry Potter and the Sustainable Planet, but couldn’t face the possibly ruinous legal bills.

For someone who used the Potter series to encourage a friend’s Playstation-addicted eight-year-old to read, and then see them utterly hooked on reading, I’ll place myself firmly in the former camp of fans.

Rowling’s two non-Potter books, The Casual Vacancy, as herself, and The Cuckoo’s Calling, under the pen-name Robert Galbraith, are great books, respectively rated 3.5 and 4 out of 5 on Amazon. Those who dismissed the author as ‘just’ a writer of children’s fiction have underestimated Rowling, and need to put those sour grapes back in the bowl.

And there is no such thing as ‘just’ children’s writing. Many authors try and write a children’s book, and find it much harder than they think. An awful lot of what’s out there is just awful. Many will try and emulate Rowling’s success and fail, and only few will succeed.

That the Harry Potter series was such a triumph, while being written under aggressive and intrusive media scrutiny, intense fan speculation and commercial pressure, is truly remarkable. Lesser authors would have crumbled. Meanwhile Rowling deployed page-turning storytelling at its finest and a Dickensian gift for naming characters, despite all the background noise.

So we hope that Fantastic Beasts and Where to Find Them is a success. We hope that at some point Rowling will return to her original series to produce a director’s cut, under less pressure, and maybe even add to the series, through other Potter-universe stories.

However, outside this fictional universe of witchcraft and wizardry, ordinary beasts are struggling, and becoming increasingly hard to find. I hesitate to call them ordinary as the real world is always more fantastic than the fantastical. From the poster animals of the conservation movement, polar bears, whales and pandas, to the considerably less attractive candidates in the world’s ugliest animals competition, life on Earth is struggling.

One thing we can be sure of is that there will be fewer ordinary beasts each year, as the relentless march of biodiversity loss and environmental degradation continues. Extinction, sea ice loss, deforestation and desertification may not trouble billionaire media moguls and their angry columnists, but it should trouble all of us that we commit ecocide so easily. It certainly troubles the beasts who live in a narrowing band of viable habitat, and are increasingly forced into closer and dangerous contact with humans.

Whatever your view on climate change (and not all environmental issues are about climate change, but it’s the biggest threat), the destruction of natural habitat is shortsighted, tragic and irresponsible.

Rowling’s imaginary fantastic beasts will make a great film that will delight her fans and annoy her critics. Earth’s more ordinary beasts need someone with her fame, fortune and fandom to write stories that are as gripping and movie-worthy about them.