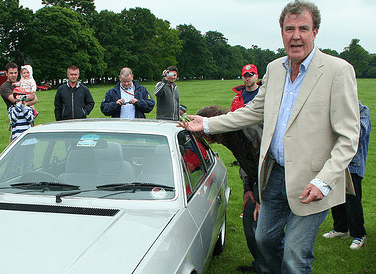 Our new Editor is Jeremy Clarkson – only joking!

As the BBC does the right thing ethically and the wrong thing financially, in the short-term (a perfect metaphor of modern investing dilemmas), here’s a short vignette of the wit and wisdom of Herr Clarkson, man of the people aka ‘media luvvie’.

The news yesterday that Jeremy Clarkson will not have his contract renewed at the BBC after an “unprovoked physical attack” on a Top Gear producer caused a domestic Twitter storm and was trending across the web in the UK.

We would be lying if we said Jeremy Clarkson was a friend of the environmental movement. In The Times in January 2008 he described people who care about the planet as “eco-mentalists” and a by-product of “old trade unionists and CND lesbians.” Nice.

In Rural Voice in 2012, he described windfarms as, “a reminder of the time when mankind temporarily took leave of its senses and decided wind, waves and lashings of tofu could somehow generate enough electricity for the whole planet.” That there’s enough offshore power potential to make the UK a net exporter of energy escapes him.

He famously said, “Supercars are supposed to run over Arthur Scargill and then run over him again for good measure. They are designed to melt ice caps, kill the poor, poison the water table, destroy the ozone layer, decimate indigenous wildlife, recapture the Falkland Islands and turn the entire third world into a huge uninhabitable desert, all that before they nicked all the oil in the world.”

In 2009 in The Times again, he wrote that higher global temperatures were not necessarily a bad thing and carbon dioxide has a negligible effect on climate. Clarkson claimed that he was expelled from Repton School for, “drinking, smoking and generally making a nuisance of himself.” He’s not counted amongst peer-reviewed climate scientists that we know of.

He semi-acknowledged in 2005 some of the negative consequences of global warming saying, “let’s just stop and think for a moment what the consequences might be. Switzerland loses its skiing resorts? The beach in Miami is washed away? North Carolina gets knocked over by a hurricane? Anything bothering you yet?”

In 2011, they faked the breakdowns of their electric cars in Lincoln (awesome cathedral city, well worth a visit, it has an original 1215 Magna Carta, no editorial bias). They concluded that, “electric cars are not the future”.

On Twitter in 2014 he argued that, “The Green Party is against fracking, bankers’ bonuses and cancer. And for fluffy kittens and soya beans.” And again on Twitter in 2014, “So, to sum up the BBC London News coverage of the lovely weather: you’re going to get cancer and if you go swimming, you’ll drown.”

On government, Clarkson told BBC News that they should just, “build park benches and that is it. They should leave us alone.” We can only surmise that he’s against legislation which would protect people from being assaulted at work.

A friend of mine had the (mis)fortune to have Clarkson use his home during 2005 while he was filming a series execrable BT adverts. My friend described him as, “an alright bloke, total media luvvie though, with a very carefully crafted ‘man-of the-people’ persona.”

Fear not Top Gear fans. Jeremy Clarkson will get another job. He has 4.87 million Twitter followers, over a million people called for his reinstatement, and he is reputed to be worth £30 million, so don’t feel too sorry for him. He’ll be fine.