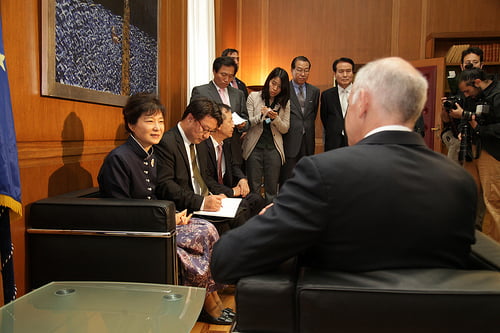 The final name to appear in our rundown of environmentally-minded politicians this week is Park Geun-hye – president of South Korea. She follows representatives from Brazil, Senegal, Denmark and the UK, and will be followed herself by five more names later this month. Charlie Wood tells us more about her.

Park Geun-hye became the first female president of the Korean Republic last month, after being elected at the end of 2012.

Her predecessor, Lee Myung-bak, was named as one of TIME magazine’s ‘Heroes of the Environment’ in 2007 for his efforts in Seoul, where he was mayor for five years. In an interview with TIME, Lee explained, “When the Korean economy was just trying to get back on its feet after the war, having parks was a luxury. But now we try to achieve a balance between function and the environment, and we try to put the environment first.”

As president, Lee was widely acclaimed for ‘grasping the nettle’ during the global financial crisis and committing his country to green growth. He is largely credited with leading the global agenda on combining the protection of the environment with economic prosperity, and invested heavily in green technology, environmental clean-up and infrastructure improvements to combat pollution during his tenure.

With this in mind, there is some trepidation about a change at the top in South Korea, but the early indications are encouraging. The election of Park, a Saenuri Party colleague of Lee, represents continuity within government and vindicates (to an extent) the environmental policies of the previous administration.

In her campaign literature, Park pledged to “establish infrastructure for accelerating dissemination of renewable energies, including smart grids and electric power storage systems” as well as promising to “realise the resource recycling society by reducing waste of resources and energies”.

She has also pledged to reduce greenhouse gas emissions by 30% before 2020, and will forge climate partnerships in east Asia to support low-carbon green growth in developing countries. These policies are a continuation of Lee’s pioneering work, and in all likelihood, South Korea will remain one of the world’s leading proponents of green technology and sustainability.

South Korea is still one of the largest importers of crude oil in the world, and while this is not likely to change in the near future, it is encouraging to see successive administrations take huge steps towards lessening demand for fossil fuels.

Lee’s efforts are an example of what can be achieved through political will, and western governments should take note (Barack Obama is thought to be a fan of the South Korean green model).

If the new president is as good as her word, then parks may never again be thought of as a luxury in Korea.