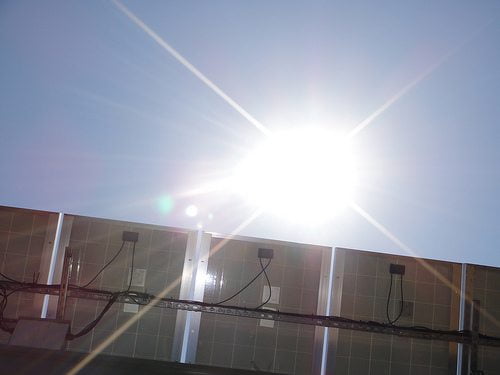 One of the criticisms of solar power and other renewable energies are their apparent status as ‘subsidy junkies’; another is their efficiency. In a recent interview, Howard Johns, founder and managing director of Southern Solar, questioned the fairness of both claims.

What other technology in the world has reduced the amount of subsidy that it requires and still continues deployment at the rate that solar has? Nothing. Yet solar – and other renewables – are dubbed ‘subsidy junkies’.

If you want a subsidy junkie, look at what the nuclear industry is going to be charging the country for the next 35 years guaranteed.

Within three years potentially, and certainly within five, solar probably won’t have any subsidy because it won’t need it. Nuclear is trying to do a deal to score a subsidy for the next 35-40 years, to the tune of £1.5 billion a year just for one reactor. Now that is a subsidy junkie.

People look at the subsidies on renewables and say, “You guys, you’re just subsidy farmers.” Actually, the analysis that I’ve seen is that globally, there are more subsidies for fossil fuels than there is for renewables – I believe they have been shown to dwarf renewable subsidies by 6 to 1 – let alone nuclear.

The whole energy industry is subsidised. It’s subsidised by the virtue that it was built by the public sector and sold off. Whether we got good value at that stage, for something that had been built over 40 years by our nation, is debatable.

The playing field is simply not level anyway. All that the subsidies for renewables do is start to redress the balance of things and make it a little bit fairer in many ways. If we can factor in the true cost of these things – the externalities – basically, those businesses that are currently running electricity generation around the world are externalising their costs.

The key thing they’re doing is pumping carbon dioxide and other emissions into the atmosphere, which is going to hit us all. We’re already seeing it with climate instability. These companies are not actually paying the true cost of a massive portion of their business. That’s not the case for renewables. Once it’s up, there are no externalities in the same way.

It’s very easy for people to slam renewables because of subsidies, but when you dig in, my God the case is so different from the very simple picture that’s painted by our critics. They paint this picture because renewables are a threat to the status quo of current businesses.

I did some maths at the height of the feed-in tariff. In the last weeks, in December 2011, if we were installing at half the rate we were installing that week, we would basically do the entire UK’s domestic housing stock within 11 years. We’d put PV on every house, effectively.

It’s very easy for people to slam renewables because of subsidies, but when you dig in, my God the case is so different from the very simple picture that’s painted by our critics

That’s a theoretical concept, but have a think about what that does to the margins of the utilities. It totally and utterly changes the game. And that is really where we’re going.

If you look at Germany, you’re already getting negative power prices. I’ve seen four or five different reports coming from different angles, all saying they were worried about the utilities’ business models as renewables come on stream.

In Germany, 20% of power is coming from renewables. Of that 20%, only 15% of the assets is owned by the big six. The rest is owned by new people: individuals, farmers, new companies moving and capturing market share.

The big utilities are not nimble enough to cope with this change, so the best way is to try and block the change from happening in the first place, which means blocking things that are truly progressive like the feed-in tariff.

The efficiency of renewables

If you look at generation from solar, and usage profiles on the National Grid, they basically match each other. There’s a small baseload consumption through the night, and in the morning it picks up and peaks about midday, then it drops down again, before another peak after teatime.

Generally, the bulk of the energy is used during the day when people are at work. Solar generates during the day. Production from solar and consumption match very well.

We have seen a lot of seismic shifts in technology around the world, and solar is now leading the way

Certainly, with our commercial customers who are running farms and factories, it’s an absolute no-brainer. Sometimes they’re producing all of the power they need for  a big chunk of the day.

Taking it to the next extreme, in Germany right now, 50% of its entire national consumption of electricity at 12 noon is often being generated by solar. It’s a massive, massive change. What it’s causing in Germany is negative power prices at those times. It totally destabilises the coal-fired power stations that just can’t compete.

We have seen a lot of seismic shifts in technology around the world, and solar is now leading the way.

We’ve been through two big silicon based changes already. The first one was computers. Twenty years ago, they said everybody will eventually have a desktop PC in their house, and people were saying, “Why on Earth would you want that?” Now you couldn’t imagine living without it.

The second one was mobile phones: “Look at that crazy brick, why are you going to want to walk around with that thing in your pocket?” Now you’ve got your internet, emails and everything you need going on within your mobile phones.

In Africa, they’ve leapfrogged landlines and gone straight to mobiles. Solar is going to do exactly the same. It’s already probably the cheapest form of electricity in many countries in the world.

Solar is here, and basically, it’s just a question of time before it appears everywhere.