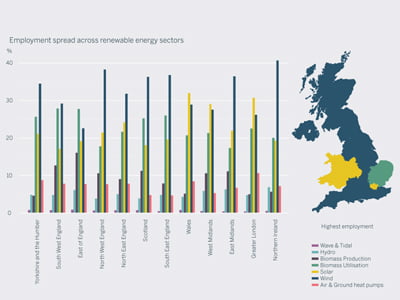 A report released by the Renewable Energy Association (REA) announced that the renewables industry supported 110,000 jobs in 2010/11. But where in the UK are these jobs located? A Blue & Green Tomorrow infographic reveals all.

Splitting the UK up into 12 areas, the REA’s report, which was co-written by consultants Innovas, finds that Greater London plays host to the most renewables jobs, with over 18,000 people employed in the sector.

With the largest number of people who are of working age, Greater London was bound to perform well. Therefore, we’ve produced an infographic that shows the percentage of working age people employed in green energy to provide a fairer representation of which areas in the UK are leading the renewables jobs charge. 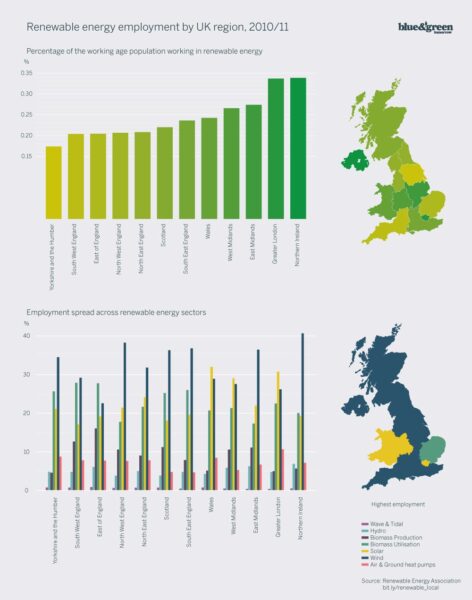 That title goes to Northern Ireland, which despite having a relatively low number of renewables jobs – 4,000 according to the REA report – this figure as a percentage of its working age population is the best in the UK.

On the other end of the scale, Yorkshire and the Humber boasts the lowest proportion of employees in the sector, whilst the South West and East of England also score relatively poorly.

The second chart shows how employment is spread across renewable energy sectors.

Wind power is the biggest creator of jobs in all but four of the areas. Wales, the West Midlands and Greater London champion solar, whilst the East of England’s biomass sector is the largest employer.

The REA’s report predicts that by 2020, the renewables sector will have grown to encompass 400,000 employees.

However, this would still be 40,000 jobs short of the current figure that the oil and gas industries employ, according to Oil & Gas UK statistics, though by 2020, UK fossil fuel resources will have severely diminished, so it’s likely that this number will decline.

The advantages of widespread adoption of renewable energy are many, not least meeting carbon emissions targets and increasing energy security by employing UK citizens. Our recent report, The Rise of Renewable Energy, echoes this mantra and goes into greater detail.

However, the shift to clean power isn’t being supported by Government as much as it perhaps should, so it’s important that communities and individuals use their initiative to realise this vision.

Good Energy, the UK’s only 100% renewable electricity supplier, is a great place to help you realise your clean energy dreams and support a new employment sector.