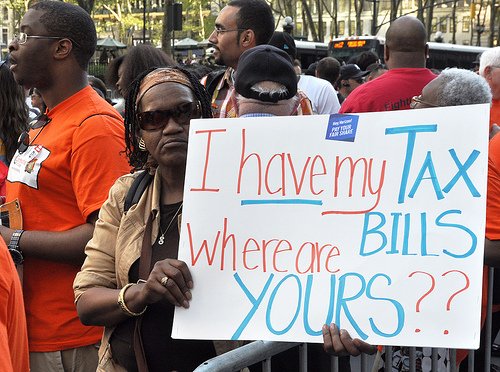 This week, two corporate giants, Amazon and HSBC, hold their AGMs and although the worlds of the internet and investment may be very different, their shareholders are raising the same concern: that aggressive tax avoidance strategies may be hurting the long-term value of the company.

Amazon has been criticised for paying only £2.4m in UK corporation tax, despite making £4.2 billion in sales. Meanwhile, research by MSCI has shown that HSBC has a higher proportion of its subsidiaries in tax havens than any other UK bank.

The reaction in the UK has generally been one of moral outrage. In March, a survey by Christian Aid found that two in three people think such tax avoidance is “morally wrong”. Margaret Hodge, the chair of parliament’s public accounts committee, commented last week that such behaviour on tax is “devious, calculated and, in my view, unethical“.

With tax avoidance being painted in such ethical terms, the way the UK’s responsible investment community has reacted to the issue tells us a lot about how the sector has evolved in recent years.

A decade ago, the loudest calls on such an issue would have been for ethical funds to screen these companies out.  However, as far as I’m aware, there are no funds offering an ethical screen to ‘avoid tax avoiders’.

As Mark Hoskin, a partner at leading financial advisory firm Holden & Partners commented to me, that is probably because the morals of tax avoidance are not so clearcut: “This is a very complicated issue because all individuals and companies seek to minimise the tax according to the rules in place.

“Minimising your tax position within the rules might be considered good corporate governance because it is driving up returns to shareholders.

“I’m not sure you could put an ethical screen in which would in effect ask companies to structure their business to pay more tax – it does not make financial sense.”

So instead of embargo, there is engagement. Responsible investors are choosing an active ownership approach, where they try to use their influence as shareholders to change the companies’ behaviour.

For example, HSBC has been targeted by NGO ShareAction to have the issue of tax raised at its AGM on Friday. Tanya Pein, a specialist in ethical investment at In2 Consulting and co-chair of the Ethical Investment Association, recently said to me, “While clients are raising corporate tax avoidance as a major ethical concern, sustainable and responsible investment (SRI) funds have not yet publicised how they are voting on this issue, or how they are engaging with their investees privately.

“So, I pass on client concerns to fund managers, and advise concerned investors to follow the growing initiative through the ShareAction website.”

Other responsible investors, particularly in the institutional investment community, are exploring the business case for acting on the issue. They argue that the negative issues that arise from tax avoidance – like reputational damage, or fees, fines and retrospective charges from watchdogs – influence their risk management.

Such investors are bringing pressure to bear on specialist index providers such as FTSE4Good to consider tax avoidance strategies as one of the criteria on which they judge the sustainability performance of companies.

That approach is another indicator of modern responsible investment – looking at the materiality of the issue, not the morality of it.

In truth, the jury is out on whether this modern responsible investment approach will actually change the behaviour of tax avoiding companies.

As Mark Hoskin concludes, “There is a lot of noise about companies paying more tax but they are simply playing by the rules. It is up to governments to work out a fair way of collecting tax.

“The truth may be that with the rise of internet businesses governments have not yet worked out how to change the tax system to catch these businesses which can be based anywhere in the world.”

Responsible investment can help, but those determined to take a stand on tax avoidance may be better served by contacting their MP rather than their financial adviser.