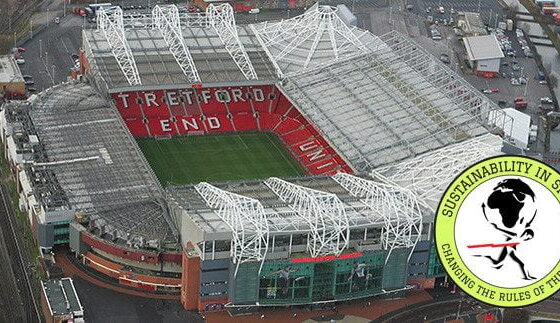 Sustainable Football: Which Team is Greenest?

With Leicester City’s Premier League title win now feeling like a distant memory, it’s very much business-as-usual this season with the top spots filled almost exclusively with predictable names. It might seem that not very much has changed in the last few years. While this might be true of the results and the league table, there has actually been something of a quiet revolution going on behind the scenes as clubs begin to embrace sustainability.

But which club is greenest? Here, football fan and writer for Soccer Box Liam Houghton discusses the ‘greenest’ football teams in play today. Certainly some of the Premier League teams have stepped up their environmentally-friendly work but it seems that they are being outdone by their lower league rivals.

It may be the case that of all the Premier League teams, Manchester United is the greenest. This is a club that needs no introduction – but their environmental credentials are perhaps not as well-known as their successes on the pitch. The club has two environmental initiatives ‘United to Switch Off and Save’ promotes energy efficiency, while ‘Reds Go Green’ is focused on waste and recycling. Alongside these schemes, the club makes the effort to put its money where its mouth is.

Rainwater at Old Trafford is recycled and used to irrigate the pitch. The club also ensures that no waste products are sent to landfill as the stadium utilises an extensive recycling scheme and any materials that cannot be recycled are sent to a waste-to-energy plant. Any wasted food from match days is composted. And the Red Devils are even sustainability-conscious away from Old Trafford. Everything from office stationery and marketing materials to IT equipment and signage boards are recycled or sent for re-use.

United are also looking for ways to utilise recycled materials for artificial turf. Working with Apollo Tyres, the club recycled 2,200 tyres and turned them into an artificial pitch at their training ground.

As you might expect, however, the Premier League teams – who focus more closely towards on-pitch success – can’t match some of the lower league clubs for sustainability. It’s possible that this title is claimed by Dartford FC who play in the National League South, the sixth tier of English football. 2006 was a landmark year for the club when they opened their brand new Princes Park stadium, which was purpose-built to be the UK’s first sustainable football stadium.

The stadium, which cost £6.5 million has an array of environmentally-friendly features including a grass roof, low-energy lighting, reclaimed rainwater and a solar panel system to provide clean energy. The club also encourages its fans to arrive at the ground by public transport rather than using cars to drive in.

It’s also worth noting that Dartford have a significant advantage over Manchester United in terms of environmental sustainability – and that’s the distances they have to travel. United need to travel everywhere from Sunderland to Southampton, but they also regularly compete in Europe, taking environmentally-costly flights. The vast majority of the teams Dartford FC play are within an hour or so of driving.

But perhaps going to a level beyond Dartford FC is Forest Green Rovers. Taken over by green energy entrepreneur Dale Vince in 2010, the club set itself the goal of becoming the most sustainable football club in Britain. This has included retrofitting their stadium, The New Lawn, to become exceptionally green.

The pitch is organic with no pesticides or man-made chemicals to keep the grass in a good state. Rainwater is collected to irrigate the pitch and solar panels have been placed in the roof to provide the stadium with green power. The players even carpool and use electric cars supplied by Nissan to reduce their carbon emissions. The club additionally made history in 2015 as The New Lawn became the UK’s first all-vegan football stadium – only vegan foods are available to purchase.

The eventual goal is to become a zero carbon football club and the team is currently looking into LED floodlights and additional ways to minimise waste and emissions.