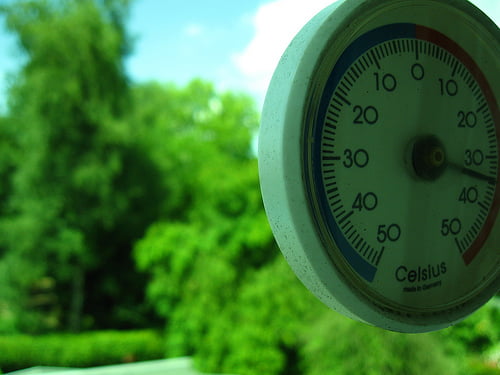 A row broke out last week over some recently-updated temperature predictions from the Met Office, which many newspapers said proved that global warming had stopped.

The most provocative piece that went with this angle was written – unsurprisingly – for the Daily Mail by – unsurprisingly – James Delingpole. His article, The crazy climate change obsession that’s made the Met Office a menace, argued that the Met Office had “finally conceded what other scientists have known for ages: there is no evidence that ‘global warming’ is happening.”

The Daily Express, The Telegraph and The Times also fell foul to the updated statistics, which, as the excellent Skeptical Science outlines here, don’t show that global warming has stopped; but in fact, that temperature increase projections have been slightly scaled down. It’s still warming, just at a slightly slower rate.

The BBC also got embroiled in the saga, with Radio 4 Today Programme presenter John Humphrys leading with the line, “The Met Office says it does not believe that global warming will be as severe as it had previously predicted”.

Later on that day, Roger Bolton, presenter of Feedback on Radio 4, investigated the issue and emphasised the importance of accurate headlines. He called upon the views of two “concerned” listeners*, who said the BBC was wrong to lead with such an angle, as well as Professor Julia Slingo, the Met Office’s chief scientist.

“Just to put the record straight, we had not put out, ourselves, a report”, Slingo said.

“We have, over several years, on an annual basis, placed our decadal forecasts on our research pages. They are experimental, they are research in progress, and these were picked up by the sceptic blogs and the story was taken from there.”

In a bold but welcome move, and in an attempt to clarify its position, the Met Office had responded directly to Delingpole’s piece in a blog post last week, saying his article “contains a series of factual inaccuracies about the Met Office and its science”.

It also said, “Mr Delingpole… inaccurately states that the Met Office has conceded ‘there is no evidence that ‘global warming’ is happening’. We have not said this at any point.

“In fact, we explicitly say this was not the case in an article, posted on the home page of our website and widely circulated, which was written in response to articles about updates to our decadal forecast.”

The Met Office’s rebuttal comes less than a month since Delingpole was criticised by the Australian Press Council for an article he wrote about so-called ‘wind farm syndrome’ in The Australian newspaper.

The Council said sections of his piece, in which he quoted an anonymous New South Wales sheep farmer comparing the wind farm industry to a paedophile ring, “[outweigh] the very strong public interest in freedom of speech”.

But undeterred by the Met Office’s dissection of his original article, Delingpole responded in his Telegraph column, calling the organisation’s defence of his claims “pathetic”.

But not everything in Delingpole’s article was factually incorrect, as the Met Office’s blog post concluded: “Mr Delingpole does quote Dr [David] Whitehouse [of the Global Warming Policy Foundation] saying, ‘When it comes to four or five day weather forecasting, the Met Office is the best in the world.’

“This supports the view of the World Meterological Organization (WMO) which consistently ranks the Met Office in the top two operational forecasters in the world.

“Our reputation for forecasting accuracy is based on our commitment to provide the world’s best weather and climate service which helps protect lives and property here in the UK and around the world.”

There is an argument that says this whole palaver could have been avoided if the Met Office had simply included a line in their updated figures that said global warming had not stopped or levelled off.

But the real wrongdoing here is on the part of the news media and journalists; for choosing to misrepresent data so that it fits in with their agenda. This is not the practice of a responsible news outlet, but sadly, is one that is becoming increasingly evident when it comes to climate change reporting.

* The two listeners, Ruth Jarman and Hilary Gander, were later revealed to be activists. Jarman can be seen in a video here trying “to get the parishioners in her local church in [a] leafy part of South-East England to take an interest in climate change”, while Gander sits on the Campaign against Climate Change’s steering group. One tweeter claimed it was “dishonest” of the pair not to disclose their backgrounds, though Gander herself revealed that the BBC had actually cut her introduction in which she outlined her vested interests. Regardless of who either of the callers were, the issue at hand – which Radio 4’s Feedback programme tackled – is that of misleading headlines.