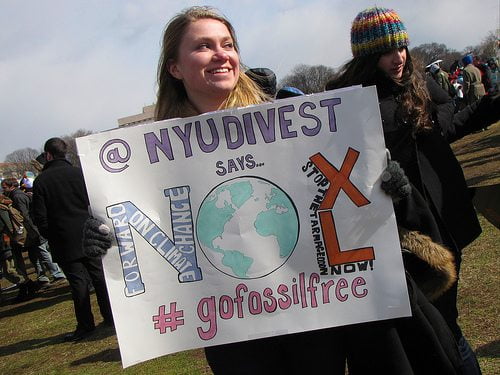 As student campaign group People & Planet prepares for its Fossil Free UK tour, others across the country are speaking out against universities investing in the fossil fuels industry.

Student pressure on academic institutions for fossil fuel investment is a well-established movement in the US, involving more than 300 campuses in the country. While some colleges have decided to follow the student calls to divest, other major universities – such as Harvard – remain reluctant.

Despite hiring a vice-president to focus solely on sustainable investment in August, the university’s president Drew Faust told students in a recent letter, “The endowment is a resource, not an instrument to impel social or political change.” She said the institution would not be dropping its investments in fossil fuels.

Harvard students have since responded, condemning the school’s lack of  action on the issue. “Divestment is a moral and political strategy to expose the reckless business model of the fossil fuel industry that puts our world at risk”, they wrote in The Nation.

People & Planet’s Fossil Free UK campaign is preparing to travel across the UK, and then into Europe, to bring the issue of fossil fuel divestment to centre stage. It has joined forces with Bill McKibben’s 350.org and Christian campaign group Operation Noah, and will visit Edinburgh, Birmingham and London to speak out against universities investing in dirty energy.

They will ask institutions to move their money, be clear and transparent over their links with the industry and support clean energy and green initiatives by providing ethical careers advice and opportunities to students.

But this is not the only way students are pushing for a cleaner future. Matt Stanley, member of the National Executive Council of the National Union of Students recently wrote on the Huffington Post, “We are increasingly aware of the dangers climate change poses for our future and that’s why it should come as no surprise that the rising environment movement is young, vibrant and determined to play our part in tackling this huge challenge.

“The UK has the greatest potential for renewable energy in Europe. Investing in renewable energy will provide thousands of jobs as well as clean energy which will only get cheaper. Investing in a greener future will create jobs, boost the economy as well as cutting carbon. It’s now up to students and young people to make the government realise that they can’t run a system based on the here and now.”

Students claim the universities’ ties with the fossil fuels industry are stronger than what it might seem on the outside. According to Natasha Gorodnitski of Fossil Free London, a report by People & Planet discloses that UK university endowment funds include up to £1 billion from the fossil fuels industry, with the London School of Economics, Imperial College and Kings College London at the top of the list of receivers.

Gorodnitski said Imperial College London receives more funding from the industry than any other UK university, with £17.3m from Shell and BP alone.

“Imperial College London has a reputation as a ‘fossil fuel university’ – its ties to the fossil fuel industry run deeper than perhaps any other higher education institution in the UK, or at the very least the connections are most public”, she said.

“The chair of Imperial’s Department of Petroleum Engineering stated publicly that companies in ‘the industry’ should visit to talk about their needs.”

When contacted by Blue & Green Tomorrow, LSE said that fossil fuels formed a minimum part of the university’s large endowment and that the school was committed to ensure that investments take into account “relevant environmental, social and governance issues”, as stated in its Socially Responsible Investment Policy.

The global consequences of climate change inaction were outlined in sober fashion by the Intergovernmental Panel on Climate Change (IPCC) recently. It’s therefore likely that student calls for fossil fuel divestment will only become more prominent, as the next generation of business and political leaders seek to preserve and protect the Earth they will inherit.