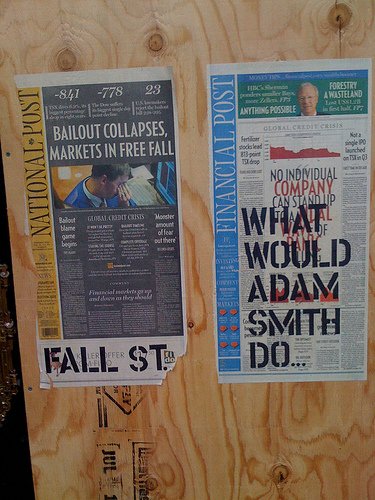 The self-interested (or selfish) investor

One of the founding principles of capitalism is that humans are not motivated by benevolence but self-interest. It is personal gain that motivates our actions and generates wealth for everyone, through the stimulation of trade between people with different skills.

In The Wealth of Nations (1776), Adam Smith wrote about the motivation of butchers, brewers and bakers. He argued that what they provide, they provided out of self-love (the desire for money), not out of any sense of benevolent duty.

In the 17th to 19th century when life was being categorised as nasty, brutish and short (Hobbes, 1651), great thinkers were sowing the seeds of modern thinking on liberty under the law (Coke, 1604), the primacy of the people (Locke) in government (albeit ‘the people’ narrowly defined as wealthy white men) over absolute monarchs and the rights of man (Paine, 1791).

Markets were viciously competitive but also deeply corrupt. There was no safety net, so any work or business was literally in a fight for survival. The limited liability corporation was emerging from monastic and guild rights but would have been condemned by Smith.

Modern democracy was in its infancy, for sale and dysfunctional. Anyone who has read Dickens will know the parlous state we were in by the middle of the 19th century.

This is the context in which Adam Smith was writing. When the very basic needs for survival food, clothing and shelter are barely being met, benevolence will be in short supply. Only the very rich could afford to be benevolent and even then were often cruel or selfish or both.

Many economists distort Smith’s treatise to fit modern free market thinking, ignoring the nuance of his work or its place in history. It was, and is, about and of its time. We can be certain he wouldn’t write about modern bankers, bookies and business managers in the same way as he did the 18th century butchers, brewers and bakers.

The same economists also dismiss charity and altruism as an ‘optical illusion’, where the motivation remains selfish, even if it’s not monetary gain that is being sought. Feeling good and assuaging guilt for excessive wealth are the underlying and ultimately selfish motivators here.

While much of what Smith wrote still holds true, you have to be careful not to pick-and-mix his theories. It is not the whole of the story and presents, in the wrong hands, a very negative perspective on human nature. It is an argument that can be a compelling theory of human behaviour but is dismissive of the sacrifices many people make to help others.

It is often used as a license to do what the hell you like.

If all human behaviour is motivated by self-interest, what can be wrong with maximising your own self-interest? For example, “If you feel good by giving millions to cancer charities, which is your selfish interest, why can’t I invest in tobacco firms that benefit my selfish interest?” A child could point out the logical fallacy in that argument.

Often, we do not have all the information, and expertise sometimes, to assess whether something optimises our self-interest or not. We are often misled by others. Often those who mislead us are credible political, religious, academic and business leaders. They often use psychological warfare, in the form of highly targeted marketing, to do so.

While many free market economists argue that the pursuit of self-interest benefits the greatest number in that it creates the greatest wealth, this is manifestly not the case by the many exercises in free market ideology in the developing world. It normally leads to rampant debt, unstable currency fluctuations and civil disorder. Sound familiar?

There is no self-interest gain to be had by risking your life to help others – yet many hundreds of thousands of people do so. There is more to humanity than that. Even if the self-interest motive were true, part of being civilised is rising above our strong animal instincts and using our considerable brains. Nasty, brutish and short cannot be our crowning glory.

Libertarians will often scream ‘property rights’ and free access to the law of redress. But this is as unrealistic on a global scale as communism. The world is full of different political and economic systems and there is not capitalist utopia with the nation state. Nor would it be utopian.

So what has this got to do with investment? The license that Smith gave to people to act in their own self-interest at the expense of others is writ large in investment.

As long as people feel that the best way to maximise their self-interest is through a healthy return, even when it kills others or harms tomorrow’s generations, we’re in trouble.

The man who discussed moral sentiments and founding father of capitalism, Adam Smith, would not approve.