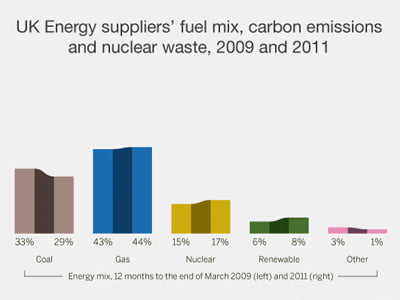 How clean is your energy supplier? Data released by Consumer Focus answers that question, and highlights that some interesting fuel mix shifts were made between 2009 and 2011.

These figures show a 1% decrease in carbon emissions, from 46 to 45 kilograms (kg) per kW/h.

For instance, EDF Energy is the only company to have decreased its renewable energy contribution (from 7% to 4%). However, it has also cut its coal and gas input significantly, and to make up for this, has hugely ramped up its reliance on nuclear power, which in 2011 accounted for 62% of its fuel mix, as opposed to just 12% in 2009.

Another interesting titbit is noticeable when looking at E.ON’s stats. It has decreased the contribution of coal and nuclear by 7% and 6% respectively, and increased gas and renewables by 7% and 5%. Despite this, its carbon emissions rose from 36 to 54 kg per kW/h, which leads one to believe that gas is a more polluting resource than coal and nuclear combined.

This theory hits a stumbling block when looking at Npower’s mix, though. Like E.ON, it too has decreased coal and nuclear and increased gas and renewables, but its carbon emissions have decreased by 3 kg per kW/h.

Incidentally, of the big six suppliers, E.ON and Scottish Power derive the highest percentage of their fuel from renewable sources, with both noting a 10% contribution in 2011.

The overall look shows that the UK’s energy market appears not to have a unified agenda with regards to its fuel mix – presumably for financial reasons.

Whilst many providers are heading in the right direction, this shift towards low-carbon resources needs to occur at a much quicker pace.

We recommend switching to Good Energy, the UK’s only 100% renewable electricity supplier, whose admirable fuel mix dedicated completely to clean power should inspire others to join the movement.

For more inspiration surrounding a shift towards renewables, have a look at our recent in-depth report, The Rise of Renewable Energy.