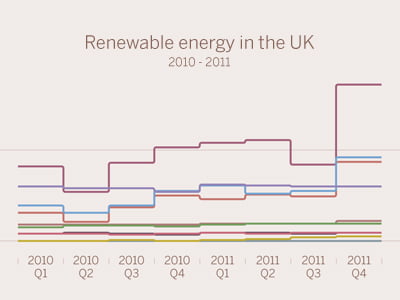 A new infographic, created using Department of Energy and Climate Change (DECC) data, visualises the energy share of all the UK’s renewable technologies by quarter between 2010 and 2011.

Unsurprisingly, onshore wind emerges as the most popular form of clean power, and contributes 33% of renewable energy in the UK.

But wind isn’t the most efficient form. That honour is shared by landfill gas and animal biomass, both of which, over the two year period, consistently generated over 50% of their potential because of their independence from external factors, such as the weather.

Renewable Energy in the UK: Ben Willers. (Click to enlarge).

The infographic shows some interesting trends and confirms some suspicions.

Firstly, the productivity of solar power is notably (and predictably) poorer in Q1 and Q4 – January to March and October to December—the winter months. Conversely, solar is most productive in Q2 and Q3—the UK’s “summer” months, and the ones with the most sun.

Nearly all the renewable energies have increased in both capacity and generation over the eight quarters, with solar leading the charge.

Between Q1 2010 and Q4 2011, solar’s capacity shot up by 3,386%, whilst its generation increased by 2,351% – undoubtedly helped by the government’s initial feed-in-tariff scheme, which took off during this period.

The chart at the bottom of the infographic shows the total contribution of renewable energy to the UK’s energy mix – a share that increased by 6% in the two year period, so that in the final quarter of 2011, 11.8% of the country’s energy was coming from clean sources.

Last week, we reported that UK investment in renewable energy had surged in 2011, with a total of £5.9 billion pumped into the sector.

Another of our infographics shows the share of renewable energy in a number of European countries. Sweden came out top as of 2010, with 46.9% of its energy coming from renewable sources.

Our recent in-depth report, The Rise of Renewable Energy, further describes the massive potential that the clean energy sector brings with it, and explains why Britain should do more to capitalise on its natural resources.

Good Energy – the UK’s only 100% renewable electricity supplier – is the place to go if you want to start using clean power in your home or business.