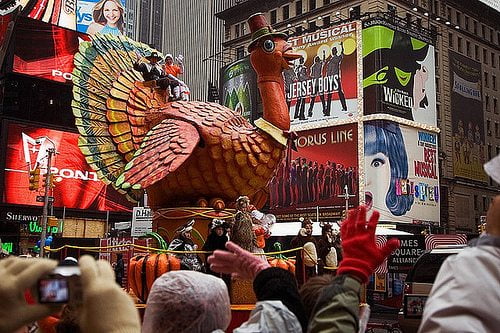 US Thanksgiving: talking turkey about sustainability

Today is Thanksgiving, the day our American cousins attend parades, eat turkeys, watch American football, and, well, give thanks. To mark the day, we’ve reviewed the major sustainability stories of the year with an American flavour. It’s not quite a Thanksgiving dinner, but at least the turkeys will be happier.

2013 was the year that US president Barack Obama delivered his Climate Action Plan, seemingly breaking further from America’s historical reluctance to commit to preserving our climate.  Introducing the plan, he sent a message not so much firm as outright aggressive to those standing in his way.

“Sticking your head in the sand might make you feel safer, but it’s not going to protect you from the coming storm”, Obama warned sceptics. It was a speech that boosted cleantech investment, angered Fox News (what doesn’t?), and heartened many environmentalists, who thought that perhaps the White House had belatedly, finally turned green.

This came as polling showed that however loud certain conservative TV personalities can rage, the US public supported climate change action.

However, those same believers may now be forgiven for wondering how much of Obama’s pledge was merely rhetoric. Since then, and indeed throughout the whole of 2013, America’s environmental record has been mixed.

One of the foremost front-page issues of American environmentalism over the last year has been the controversial Keystone XL pipeline.

The development, which would link Canada’s super-polluting tar sands to refineries in Texas, was first proposed in 2008, and had been originally scheduled for completion in 2013. However, the development first needs the go-ahead from the US State Department, as it crosses the US-Canada border. Obama’s administration has so far delayed this decision.

A considerable lobby of supporters is urging Obama to get on with it, despite reports indicating that Keystone may bring minimal economic benefits while generating a rush of high-risk oil investments. The president has not ruled out the project. In his definitive climate change speech, he said that the pipeline would only be approved “if it doesn’t significantly exacerbate the climate problem”.

The US government has also been criticised for its stance on emissions from aviation, which is directly at odds with Obama’s strong words. Under the emissions trading system (ETS), the EU has attempted to make airlines pay for their pollution contributions.

However, last November Obama gave his transport secretary the power to prevent US airlines from participating. When the aviation industry is responsible for 5% of all global emissions, this seems like a move that will only undermine America’s decarbonisation efforts in other areas.

Obama also this year praised the sustainability initiatives of nations such as Sweden, a world leader in renewable energy. However, America’s own energy revolution has been (fossil) fuelled by fracking and shale gas.

There has been good news, though, with some of it rather paradoxically linked to the rise shale gas. In 2012, US energy related carbon emissions fell to their lowest levels since 1994, according to recently released Energy Information Administration (EIA) figures. This achievement was partly credited to the substitution of natural gas for coal in electricity production, while the input of renewable sources actually fell.

Yet, this eye-catching headline comes with significant caveats. While shale gas has replaced coal in the US, this very same coal has still been mined and burnt elsewhere. In 2012, US coal exports reached a record high of 126m short tonnes, a 17% increase on the previous year. As some of this coal will have been exported to developing nations with less advanced energy generation technology, the environmental impact may in fact have been worse.

To make matters worse, the US government may be significantly underestimating its polluting output, according to a recent study suggesting the country is emitting twice as much methane – a greenhouse gas 21 times as potent as CO2 – as previously thought.

Perhaps providing more cause for optimism is Obama’s pledge, as part of that climate action plan, that the US would end its financing for foreign coal projects. He said at the time, “Power plants can still dump limitless carbon pollution into the air for free. That’s not right, that’s not safe and it needs to stop.”

In July, the Export-Import Bank of the US rejected a proposal to fund the construction of a coal-fired power plant in Vietnam, showing perhaps that this was a policy being taken seriously. The significance of this act should not be underestimated, as a recent report identified the Bank of America as one of the leading financers of international coal projects over the last 8 years.

In economic terms however, the US is still surely a long way from sustainability. Its eye-watering levels of debt were recently highlighted by the embarrassing government shutdown crisis. The US currently has a growing debt pile of around $17 trillion (£10.6 trillion) – the price of around 965 billion Thanksgiving turkeys.