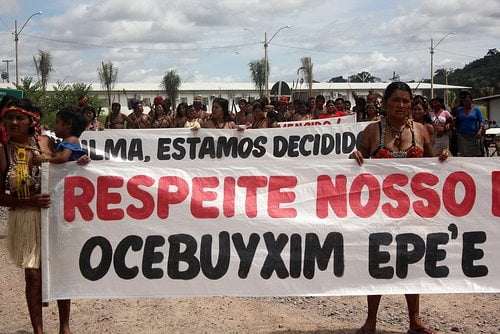 Not all renewable energy projects are truly ethical developments, as a couple of hydropower developments in South America show.

There are plenty of good reasons to promote and develop clean energy – the most prominent being climate change and a need to cut global carbon emissions.

But there are occasionally scenarios that make some projects unfeasible and unwise.

In Britain, one of the main objections to technologies like wind revolves around aesthetics. Opponents – called nimbys (‘not in my back yard’) – claim turbines will spoil the countryside. But in parts of South America, people are standing up to renewables projects for far greater and much more viable reasons.

Local communities and campaigners say the Belo Monte dam in Brazil and the Diquís hydroelectric project in Costa Rica cannot be justified, because they undermine the fundamental rights of native people and threaten the surrounding environment.

The Belo Monte dam project on the Xingu river was first proposed more than 20 years ago, with developers saying they would build the world’s third largest hydropower facility. Filmmaker James Cameron decided to make the issue a feature in A message from Pandora.

But the project has received intense criticism.

“The Belo Monte dam complex is designed to divert 80% of the Xingu river’s flow, devastating an area of over 1,500 square km of Brazilian rainforest while resulting in the forced displacement of between 20,000 – 40,000 people”, non-profit group Amazon Watch denounced.

Human rights and environmental organisations have claimed that so far, environmental assessments of the area have been inadequate and that not enough has been done to ensure indigenous people will not be affected by the project. They add that the dam is likely to increase deforestation, destroy fisheries and the vulnerable ecosystem of the Amazon and even increase global warming.

Amazon Watch adds, “Scientific studies, such as those by leading climate change scientist Philip Fearnside of the Amazon Research Institute INPA have shown that greenhouse gas emissions from large dam reservoirs in the Brazilian Amazon can be equal to or higher than the same amount of electricity produced by coal burning power plants.”

Moreover, campaigners argue that the energy produced thanks to the dam would be only 39% of its nominal capacity – an average of 4,462 megawatts (MW) – throughout the year, and that promoting more sustainable projects such as solar and wind farms would deliver more energy at a lower environmental and social cost.

In Costa Rica, the government is determined to go ahead with the Diquís hydroelectric project, planned in a region where indigenous people live. The government is ignoring the principle prescribe in the International Labour Organisation (ILO)’s convention, which says that indigenous people should be consulted and should provide consent before projects affecting their livelihood begin development.

Although we have a moral duty to promote cleaner sources of energy, this urgency cannot override basic human rights or degrade the very environment it is designed to protect.

The basic function of renewable energy should be to achieve a cleaner, safer and better world for everyone. It’s clear that these two South American projects have forgotten this.