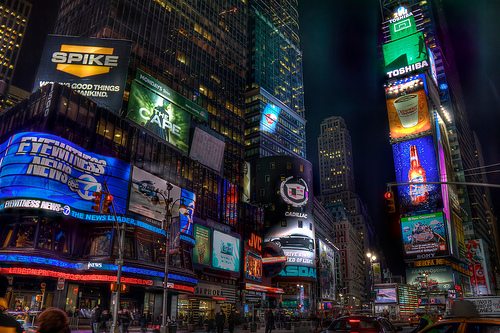 The news that Publicis and Omnicom are merging to create an advertising and creative leviathan, valued at just over $35 billion with nearly $23 billion in revenues, has set the marketing world alight. But the fact total global spend on advertising will hit $600 billion in 2015 is more interesting.

It will also unite agencies that work with “some of the world’s biggest buyers of advertising, including mobile carriers like Verizon and AT&T, drinks companies like Coca-Cola, financial services companies like Visa, and many more.”

There’s going to have to be some seriously high Chinese walls internally to keep clients happy and some anti-anti-trust lobbying in multiple territories to get the deal through.

What really interested us however, was a link to the news that global advertising spend would reach $518.8 billion in 2013 and exceed $600 billion in 2015.

$518,900,000,000 is a lot to money to encourage you (you lucky, lucky consumer) to choose, buy, consume and then throw away more stuff. Most of this stuff will be bought because of insecurities, be unhealthy or harmful, unnecessary or have built-in obsolescence, be resource inefficient and generally unsustainable.

Freelance journalist and author ES Turner described advertising as, “The whip which hustles humanity up the road to the Better Mousetrap. It is the vision which reproaches man for the paucity of his desires.”

$519 billion is a big number, but a seemingly small share of GDP to those of us lucky enough to live in the developed world with our trillion dollar economies (and even bigger debt mountains).

$519 billion exceeds the gross domestic product of each of the poorest 171 countries of the 192 measured by the World Bank, including Norway, Poland and South Africa.

$519 billion is more than the combined GDP of the poorest 88 countries in the world. Many of which will suffer the worst and most deathly effects of climate change – such as small island states and those in extreme weather settings.

For reference, the total revenues of oil and gas giants Shell and ExxonMobil who exacerbate climate change, was $484 billion and $482 billion respectively in 2012.

In a typically provocative 2007 TED talk, Bjorn Lomborg set out the relative merits of spending on climate change mitigation versus solving other pressing global issues. He used as his baseline figure just under one tenth of the world’s current advertising spend ($50 billion). He chose to spend that $50 billion over four years, representing just one fortieth of the annual advertising splurge.

He estimated that the cost of implementing the Kyoto protocol on climate change would cost $150 billion. Early Intergovernmental Panel on Climate Change (IPCC) research estimated the protocol would cost between 0.1-1.1% of global GDP ($55-$615 billion). Without the US (which ultimately did not sign the protocol), this fell to 0.05% of GDP ($28 billion).

Lomborg pointed out, “The UN actually estimate that for half that amount, for about $75 billion a year, we could solve all major basic problems in the world. We could give clean drinking water, sanitation, basic healthcare and education to every single human being on the planet.”

A fallacy of the false alternative

Don’t get us wrong, we find Lomborg an intelligent and engaging speaker. He just misses the point about most things.

Lomborg’s suggestion that there is a trade-off between solving climate change and addressing some of the world’s other major problems is a ludicrous false dilemma.

There is more than enough wealth in the world to solve every single one of the major global problems. It’s just that those with the wealth would prefer not to. We choose to spend one in every $142 on advertising stuff.

It is assumed that advertising increases consumption and this stimulates economic growth. That said, the tobacco, alcohol and gambling industries swear blind that advertising does no such thing, although that is puzzling since they spend so much on it.

The International Monetary Fund’s World Economic Outlook forecasts global growth of 4% in 2013. The advertising industry expects to see 5.4% growth. Despite much heralded improvements in marketing as a science, we appear to spending a lot more to achieve less.

Here’s a thought. An 8.3% tax on advertising might provide this discouragement and provide the $50 billion Lomborg wants us to spend on addressing the world’s most pressing issues.

William Lever, the first Lord Leverhulme and founder of Lever brothers (now Unilever) made the oft-misattributed and misquoted statement about advertising, “I know half my advertising isn’t working, I just don’t know which half.”

In reality, almost all advertising in a digitally connected age isn’t working and is wasted on simply terrible products and services. If companies made genuinely exceptional products and services in the most efficient fashion that met a genuine consumer need, word-of-mouth alone would propel sustainable sales, loyalty and advocacy.

Lomborg concludes his talk with the words, “At the end of the day, you can disagree with the discussion of how we actually prioritise these, but we have to be honest and frank about saying, if there’s some things we do, there are other things we don’t do. If we worry too much about some things, we end by not worrying about other things. So I hope this will help us make better priorities, and think about how we better work for the world.”

‘Better priorities’ and ‘better work for the world’ would mean spending less on persuading us to buy more junk and more on addressing climate change, and providing clean drinking water, sanitation, basic healthcare and education to every single human being on the planet.