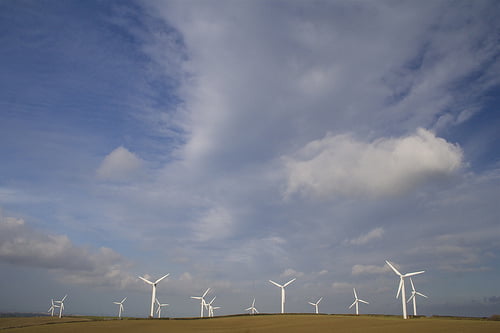 Wind can be a winning argument with voters

People across the England and Wales will vote in local council elections today. On the back of a recent poll that showed over a third of the public will vote for candidates that adopt pro-wind stances, Jennifer Webber of RenewableUK writes how the technology can be a winning argument for councillors and politicians alike.

For a number of years now, there has been a myth thrown around by anti-wind groups that wind, in particular onshore wind, is unpopular with local communities and with voters. It is a myth that has helped them to gain credibility in certain parts of the media, and one which has resulted in some politicians believing that they need to shy away from supporting wind to gain favour with their constituents, despite both government and independent figures that consistently show high levels of support.

Results from yesterday’s ComRes poll into voter intentions may offer a new view on this.

What this recent polling helps to do is to puncture that myth and expose the emptiness of it. Ahead of today’s local elections, support for wind held up extremely well and showed that politicians are unlikely gain anything from jumping on an anti-wind bandwagon.

Over a third of voters said they would be more likely to back a candidate who supports building more wind farms, and only 24% said they would be less likely. The biggest percentage, 36%, said that wind farm developments would not make a difference to their vote.

The results get more revealing when broken down by party. UKIP has made a big deal of its opposition to wind, yet 23% of those who voted UKIP in 2010 actually said a local candidate backing wind would make it more likely that they would vote for them, with a further third saying it would make no difference to their vote.

With these results it is a surprise to me that Nigel Farage has developed this theory that opposing wind farms is a way of getting the masses of votes that will sweep UKIP in to town halls across Britain. He claims to be the only politician that speaks the truth on the issues affecting normal people in the UK, but when most people say they are more concerned with a lack of affordable housing than wind farms, he is on the wrong side of his own argument.

This perhaps points to the conclusion that local Tory candidates don’t need to go anti-wind in an attempt to stem a feared exodus of their voters to UKIP. In fact among Tory voters the figures point to views on wind farms being fairly evenly balanced between pro, anti and neutral, with each getting about a third of support.

So when Tory councillors and would-be councillors are knocking on people’s doors today trying to attempt them to get out and vote, they are only likely to knock on one door out of every three where they will find a Tory voter voicing anti-wind sentiments.

With parties often looking for female votes, it’s worth nothing that support for wind from a local candidate brings an overall gain of 12% of votes.

With both Labour and Lib Dem voters, the levels of support for wind at these elections stands firmly at around four out of 10 saying that a local candidate could help secure their vote with a pro-wind stance. While some might say that this is safer ground for these two parties, it is important to note in the case of both Labour and Lib Dem voters there were other issues that were much more likely to sway their vote.

All of these statistics begs one obvious question. Where are all the hordes of normal people who are fed of wind farms and want to banish them?

Other issues such as housing, immigration and tax are far more likely to provoke a lively reaction from people walking to the polling booths today than wind farms are. So maybe this means that some local and national politicians have made an error of judgement by putting opposition to wind as one of the main pillars of their political strategy.

The worry is that the main result of focusing on opposing wind rather than what people want to talk about is continued voter apathy.

Jennifer Webber is director of external affairs at RenewableUK, the trade and professional body representing the wind, wave and tidal energy industries.