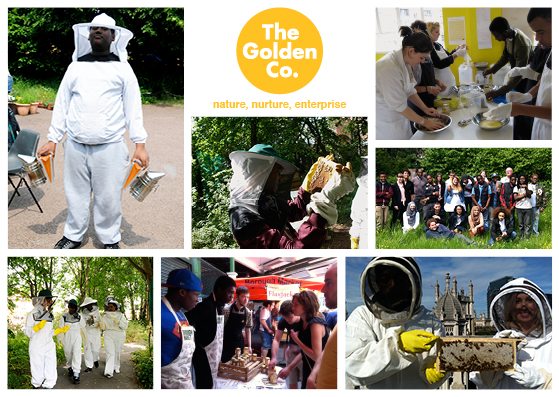 Shortlisted at the recent 2013 Observer Ethical Awards, Zoe Palmer is a role model for young people who want to engage with sustainability, wildlife and entrepreneurship. Founder of the social enterprise, the Golden Co, Palmer spoke with Emma Websdale to discuss the importance of balancing business with nature.

Providing a platform to allow young minds between the ages of 16-21 to develop crucial skills for employment and offer them a chance to engage with nature, the Golden Co is a social enterprise with a difference.

“We train young people to look after bees and to produce natural products from their hives”, says founder Zoe Palmer.

“We offer them the opportunity to go and work along the rooftops of corporate client’s in London, looking after the bees and sharing their knowledge with employees from the different organisations.”

“We then sell our products on a market stall in the local community. This ensures that the young people are involved in all aspects of the lifecycle of the products from growing, producing and selling products made from wax.”

The Golden Co’s projects are all about connecting young minds with wildlife. Palmer describes why she feels this works so effectively: “I think young people are very connected to the area they are living in, so they already have a strong identity with the land in some sense, but what a lot of them are missing is a connection with nature.

“When we have given them the opportunity to connect with nature in a safe environment, it’s allowed them to relax and step into a place that is different and without some of the difficulties they have to face when they are in their own normal environment.

“At the same time it’s just on their doorstep, so it’s like stepping into a different arena and I think this allows a better connection with themselves and one another.”

A recent poll revealed that almost 75% of young people aged 11-16 are worried about the consequences of global warming. Palmer, too, has witnessed this level of awareness and environmental stewardship among the younger generation.

“Younger children have a great citizenship”, she says.

“In many ways they are better versed then a lot of us are because they are growing up in a time where there is more consciousness of the environment.

“However, although they are educated about environmental issues to some extent, they lack the experience within a wild, natural environmental and so it’s hard for them to connect to the impacts that will arise from future issues.”

With recent debate over the topic of climate change being removed from the latest draft guidelines of the national curriculum for children in key stages 1-3, Palmer explains some of the likely consequences involved with failing to engage younger people with environmental issues.

“There is a book out at the moment called The Nature Principle – and we’ve been inspired by that. It’s about the nature deficient disorder – how our lives are becoming increasingly disconnected to the natural world”, she says.

“It’s been scientifically proven that this disconnection can have a physiological impact on their health, well-being and happiness.

“On a broader level, environmental issues are facing us, and if younger people don’t feel encouraged or know how to tackle these, it will cause them a lot of stress and trouble in the future.”

During 2012, the Golden Co received funding from the Evening Standard Dispossessed Fund, which the it used to co-ordinate an entrepreneurship programme.

Palmer explains,“This programme is used to provide young people with credited and practical training in the development, marketing and selling of products.

“Last year, three teams of young people developed their own lip balm, all based on the sustainable values of our company.

“In their last session, they sell their products. They learn about the lifecycle of a product in six weeks and then at the end they receive a certificate that contributes towards UCAS points.

“During the last session, we also have a Dragons’ Den type session, where we have experts from the field’s enterprise. A member from the Fairtrade Foundation was a judge of the winning products last year.”

A recent report commissioned by Friends of the Earth revealed that many of Britain’s wild bees are in serious decline, and Palmer explains why bees play a leading role within the Golden Co: “Bees represent the agility and power of nature.

“We lost many hives this year because of the bad weather. Bees are vulnerable to starvation over the winter and this demonstrates to young people how nature is effected by climate change. I feel this is something that we should all recognize.

“We also get to witness the way nature adapts to climate change, which is also very inspiring. There is also the broader issue that bees in the UK and around the world are facing population declines and colony collapses.

“Bees also offer us a way to connect with other people. For example, around the beehive you have to work as a team, you have to connect together; otherwise, if you are stressing and battling with others you are going to get stung.

“Overall bees work as a tool to promote connection, whilst acting as a metaphor for the fragility and wildness of nature.”

Palmer was recently shortlisted for the unsung local hero award at the 2013 Observer Ethical Awards. She was put forward by one of the young people she worked with.

“A combination of things [inspires me]”, says Palmer

“I find working with young people inspiring because they have a sense of resilience and creativity that I want to bring out of them. Nature is also my inspiration – to create products whilst working in harmony with it.”

To find out more about the Golden Co, its projects and products, you can visit its website.