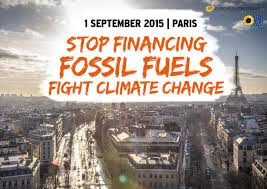 On the 1st September divestment leaders launched the “Divest for Paris” challenge at the Paris Divestment Conference, a day-long gathering co-hosted by 350.org and the European Green Party. The summit featured high-profile speakers such as Bill McKibben, co-founder of 350.org, Stephen Heintz, President of the Rockefeller Brothers Fund, Nicolas Hulot, Special Envoy of the French President for the Protection of the Planet, Pascal Canfin, from the Commission on Climate Finance and former French Development Minister, representatives from the World Council of Churches, the Carbon Tracker Initiative, and many more.

The divestment movement is challenging institutions, individuals and governments to show climate leadership and align their investments with their values by divesting from fossil fuels ahead of the COP21 Climate Summit in Paris. An avalanche of public commitments to divest from fossil fuels would build momentum and send a powerful signal that the world is rapidly and irreversibly moving away from fossil fuels.

“If you say you want action in Paris, then you have a responsibility to divest from fossil fuels,” said 350.org Executive Director May Boeve. “By shifting resources from the dirty energy of the past to the 100% renewable energy of the future, institutions can model the type of action we need from countries at COP21. With our climate in crisis, divestment is a moral necessity.”

Worldwide the divestment movement continues to grow with daily commitments being announced. In Europe an increasing number of institutions are joining the call to divest from fossil fuels. “The European Parliament has formed a cross-party group working on the carbon bubble and divestment while the European Central Bank is looking into the risks of a carbon bubble. Unfortunately, however, the European Commission seems to be dragging its feet. This divestment conference is therefore also a call to them: don’t be behind the curve. There is no future for fossil fuels – or there is no future,” says Reinhard Bütikofer, Member of Parliament and Co-Chair of the European Green Party.

Though the divestment movement is nascent in France, it has already gathered a number of successful commitments. Over the last months, the council of the city of Paris, and assemblies of the Régions Ile de France and Rhône Alpes (France’s two main regions/districts) as well as the Département of Gironde (regions) have adopted motions backing fossil fuel divestment. Yannick Jadot, Member of the European Parliament for the Greens said: “Citizens, employees, municipalities, reasonable politicians, all of society can take action to ensure our money doesn’t destroy the climate. This is a real revolution in the fight against climate change, where finance and ecology finally meet.”

Emphasising the power of divestment as a democratic necessity, Nicolas Haeringer, 350.org divestment organizer in France said: “French institutions, such as the Caisse des Dépôts – France’s most important public investor – should set the example and listen to local authorities. Divesting from fossil fuel helps address the climate crisis, but is also a democratic necessity: if investments have an impact on our future, then investors should listen to the demands of citizens and their representatives.”