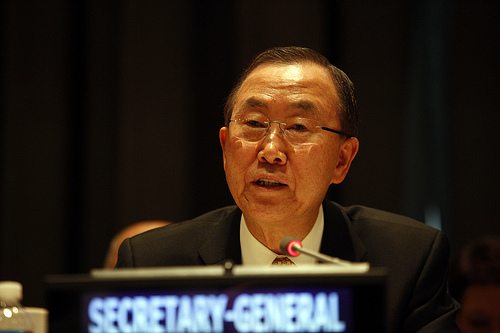 The UN’s secretary-general Ban Ki-moon has called for increased cooperation and investment to tackle climate change, noting there has been “enormous progress” but that the stakes are getting higher.

Speaking at a conference hosted by Bloomberg New Energy Finance, Ban recalled that two years ago at the same summit he called for smart investments that align business opportunities with sustainable development. He noted that “enormous progress” has been made in those two years.

However, Ban added, “Climate change is the defining issues of our age. It is also a phenomenal economic opportunity. The moment of truth comes this December at the Climate Change Conference in Paris. There, we have to leverage private sector investment in climate change.

“Right now, infrastructure and sustainability are treated separately. But they belong together. Long-term investments have to be sustainable or we will head down the wrong path. We need to literally build a new future with investments.”

While investment in renewable energy sources increased by more than 15% in 2013, clean energy still represents just 10% of global electricity. Ban argued that incentives could drive renewable energy forward, with smart investors benefiting as a result.

Ban also spoke of the Green Climate Fund and developed countries providing climate finance to poor nations, which typically have contributed little to climate change but will suffer the worst effects.

In 2010 rich nations agreed to provide an additional $100 billion (£67bn) each year to developing countries by 2020 to help them cut greenhouse gas emissions from both public and private sources. However, pledges so far only represent a small portion of the finance needed.

A study published last month suggested that rich nations could pledge up to $2 trillion (£1.35tn) each year by 2050 to developing countries to help mitigate and adapt to climate change without exceeding more than 2% of GDP or the finance provided being prohibitive.