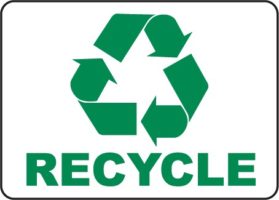 6 Things You Probably Didn’t Know You Could Recycle

Over the past few years, the spotlight has been on green practices and eco-friendly habits. But it’s not just businesses and local municipalities that need to focus on “going green.” It begins at an individual level with smart habits, such as recycling. And while we’re all aware of the importance of separating the trash and filtering out things like plastic bottles and aluminium cans, there are numerous household items you probably don’t realize are recyclable.

Old appliances like refrigerators, washers and dryers, TVs, and dishwashers are nuisances. When replaced with newer models, how do you get rid of the older items?

Sometimes the company that installs your new appliance will take the old one and get rid of it for you, but what if they don’t? Well, the local garbage dump isn’t the only option. Working appliances can be dropped off at thrift shops – such as Goodwill – and you can contact the Steel Recycling Institute for information regarding where to recycle broken appliances.

We’re in the middle of political campaigning season. If you have a bunch of yard signs, think twice about simply throwing them in the trash. Did you know that they can be recycled after election season comes to a close?

Collect the aluminum wire stakes from the signs and take them to your local recycling plant. Depending on the material the actual sign is made from, you may also be able to recycle that material too.

If you recently purchased a new pair of tennis shoes, think twice before throwing your old pair in the trash. Many shoe brands have recycling programs that can maximize the useful life of your old shoes.

For example, Nike has the Reuse-A-Shoe program that turns old athletic shoes into Nike Grind, the material used for gym floors and tracks. Each year, more than 1.5 million shoes are recycled. And since the program began, more than 28 million pairs have been collected. That’s what you call making a difference!

According to the EPA, “If all the oil from American do-it-yourself oil changers were recycled, it would be enough motor oil for more than 50 million cars a year.” That’s an incredible statistic and should encourage those of you who change your own oil to seek out a recycling location. In many cases, your local auto parts store or repair shop will gladly accept old motor oil, assuming it hasn’t be contaminated with other materials.

As most people know, old CFL light bulbs are nowhere near as energy efficient as LED bulbs. So, if you’re going through your home and replacing the CFL bulbs, you aren’t alone. But you do need make sure you’re recycling these bulbs appropriately.

Call your local garbage service and ask them if they offer mercury or CFL recycling. If they don’t, then the retailer you purchased the lights from might accept the bulbs. This isn’t likely – but it is possible. Keep asking around until you find a good solution.

After moving into a new house, you’re probably left with dozens of cardboard boxes lying around in your garage. Avoid the temptation to simply cut them up and throw them in the garbage can. Instead, contact local nonprofits to see if they can use them. They may even come pick them up for you. Otherwise, placing a free ad on Craigslist or Freecycle may help you find a suitable home for them.

Recycling shouldn’t be something you only think about when drinking out of a plastic water bottle or tossing aluminium cans. Plenty of everyday items – including those mentioned in this article – are recyclable.