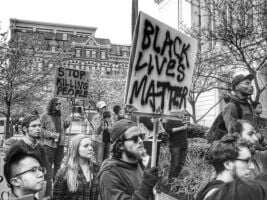 Air Pollution & Climate Injustice Must Be Highlighted : Friends Of The Earth React To Protest

Friends of the Earth say that we must recognise environmental injustices in the black community highlighted by Black Lives Matter UK protest.

A City Airport protest today (6 September) by Black Lives Matter UK has rightly shone a light on the injustice of the disproportionate impact of the air pollution crisis on black and poorer communities, and the fact that climate change is impacting those who did the least to create it.

Friends of the Earth has been campaigning against the expansion of City Airport and urging politicians to do much more to address the UK’s air pollution crisis which leads to the early deaths of thousands of Londoners each year.

“Air pollution disproportionately harms black and poorer communities, who are more likely to live in areas with poor air quality. Black Lives Matter UK are right to draw attention to this reality.

Black Lives Matter UK are right to draw attention to this reality.

“When it comes to climate change, those who have done the least to create the crisis are already amongst some of the worst affected. Devastating floods, droughts and famine, mainly affecting the lives and livelihoods of millions of poor and black communities in the Global South, is the stark reality of climate change. This is going to get much worse if rich countries like the UK don’t do more to cut their emissions, faster and deeper.

“We must recognise and raise awareness of these environmental and racial injustices and make sure that those most affected by these issues are listened to and included in plans to deal with them.”