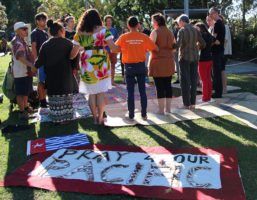 Around The World Faith Communities Join In Prayer For Pacific Islanders

Communities that are faith-based from the Pacific region and from around the world have organised prayers for Pacific Islanders whose homes have been terribly affected by climate change.

More than one hundred events took place over the past two weeks as part of the #PrayForOurPacific campaign. Small island countries in the Pacific are already dealing with the need to relocate human settlements as sea levels rise and intense storms increase in the region due to climate change.

“While the fight against climate change takes many forms around the world, praying together as a region and community concerned about the devastating impacts of climate change across the Pacific is also a powerful way we can unite to combat the climate crisis,” highlighted Koreti Tiumalu, 350.org Pacific Coordinator.

Up to 120 events were registered in 23 countries by individuals and faith based communities that dedicated services, sermons, prayer circles and bible studies to looking at faith and it’s role in building resilience in this climate crisis. In the Solomon Islands, over thirty church youth groups organised a combined youth service, with a national broadcast of the event. “We want the whole nation to listen to this sermon because it’s important for all of us to remember our roles as stewards of this planet,” stated Stalin Konainao, 350 Solomon Islands Coordinator.

In Samoa, the Catholic and Presbyterian communities organised activities, the Methodist community engaged their youth networks, and the Baha’i faith organised a gathering for young people to discuss the power of prayer and climate change in the Pacific.

Beyond the Pacific Islands, Friends of the Earth, Rize for West Papua, Fossil Free UQ, Brisbane Solidarity Group, 350 Australia, and members of the Brisbane community formed a prayer circle at the Picnic Island Green in South Bank, Australia. In the United States, the Tongan Community of San Mateo, California, held a week-long vigil which culminated with them praying together at their Sunday service.

“While countries around the world are ratifying the Paris Agreement, in the Pacific we know that the international commitments currently on the table are not enough to protect our people from the worst impacts of climate change. The support and solidarity around the world for #PrayForOurPacific show that more and more people around the world are realising what we stand to lose because of climate change, and are ready to organise themselves into action. For us, this can only be the beginning of a truly Pacific led and shaped, Pacific climate movement,” concluded Tiumalu.