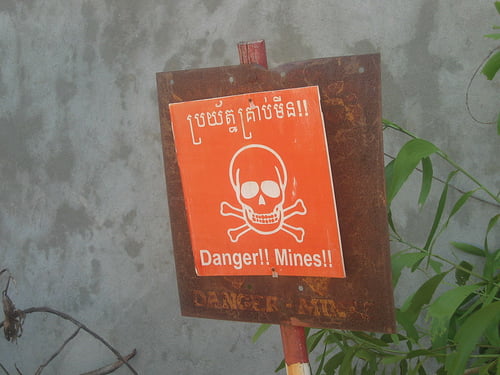 A number of Britain’s biggest banks and insurance companies are abandoning investments in the cluster bomb manufacturing industry—a welcome but overdue decision.

The quartet—Lloyds Banking Group, Aviva, the Royal Bank of Scotland and The Co-operative—are all implementing measures to cut all ties with a dozen companies that assemble cluster bombs and landmines, and subsequently banishing them from their investment portfolios.

It is very positive news, but the fact that it’s taken this long to decide to dump a sector that accounts for thousands of civilian deaths every year further highlights the overriding emphasis placed on profit. It also highlights that there are a good many other banks and insurers who are still investing in a very unethical space.

A cluster bomb, as described by this video from The Real News, is a weapon that contains explosive material, and is designed to be dropped from an aircraft or fired from the ground onto a large area.

On occasions, the bombs don’t explode, leaving behind a deadly hidden shell that can cause serious injury or death when disturbed.

The banks and insurers who continue to invest in the industry do so despite Britain signing the Convention on Cluster Munitions (CCM)—a global treaty that prohibits all use, stockpiling, production and transfer of cluster bombs—in August 2010.

Questions must be raised over the UK Government’s commitment to the CCM, given that it has taken 19 months for the quartet of more scrupulous institutions to duck out of investing in the industry.

“Cluster bombs are horrific weapons that have a devastating and long-lasting impact on communities where they have been used”, Laura Cheeseman, director of the Cluster Munition Coalition said.

“All countries should outlaw these weapons by joining the CCM that bans them.

“Financial institutions need to make sure that they aren’t financing the production of illegal weapons. This is best done through comprehensive policies and strong national laws making investment expressly illegal.”

The International Committee of the Red Cross released a report in 2010 that looked at cluster bomb victims. An overview reads, “There are victims of cluster munitions in at least 21 states and four areas of Africa, the Middle East, Asia and Europe.

“A 2007 study published by Handicap International confirmed 13,306 deaths and injuries due to cluster munitions.

“Survivors of cluster munition incidents will often have serious blast or fragment injuries. They will frequently need long term treatment and rehabilitation, which will include medical care, physical rehabilitation, psycho-social support and socioeconomic reintegration.”

The harrowing thing is that cluster bomb and landmine sectors tend to make up only a tiny fragment of the portfolios of many high street banks and insurers. Other unethical industries such as tobacco and the wider arms trade can often make up a large portion of an organisation’s investment selection.

It is a sobering thought that those with money in such institutions are unknowingly funding worldwide death and injury.

But all is not lost. There are banks and insurers whose portfolios are more considered, comprising of companies that are more ethical and sustainable and often, doing positive work that balances the needs of the planet, its people and prosperity.

March was Move Your Money month in the UK – a campaign that encourages people to move their money away from high street banks to try to get them to radically change their often unethical behaviour. But that doesn’t mean that you can’t move your money in April, May or June…

The campaign’s co-founder, Danielle Paffard, spoke to Blue & Green Tomorrow and said, “It’s great news that [the banks are] moving in the right direction, but I think there is still a long way to go and it’s important that we maintain pressure from the public to show that investing in things like arms companies that are putting people’s lives in dangers and have terrible human rights records, are not supported by our banks”.

B&GT did a rundown of the top five ethical banks in February, at which point The Co-operative already ranked in second and third place (for its online offering, Smile).

Going beyond who you bank with, you can also ensure that your investments support companies with higher ethical and sustainable standards. Get in touch with your IFA or fill in our online form and we’ll help you through the process.

Time to move your money?