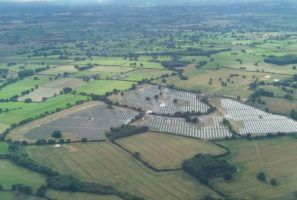 Connection Formed Between Lightsource And Contracts For Difference

Connected on June 30th, the Charity Farm installation, in Shropshire, has an installed capacity of 11.94MW and was one of five solar projects to win support in the first round of CfD auctions last year – the mechanism which replaced the Renewable Obligation Certificates (ROC) scheme for projects over 5MW.

The CfDs work by offering stable revenue for electricity generators at a fixed level – known as the ‘strike’ price. Generators – such as Lightsource – receive income from selling electricity to the grid as normal, but when that rate drops below the agreed ‘strike’ price they receive a top up fee from the government. Charity Farm won its contract with a strike price of £79.23 per megawatt hour (2012 price).

All power generated by the project will be purchased by supplier Axpo UK Limited in a deal worth £7.5m over seven years.

A total of 71.55MW of solar projects were awarded CfDs in 2015 and the Lightsource project is the first solar CfD project to be delivered.

Lightsource teamed up with premier EPC contractor Biosar Energy (UK) Limited to install the project – with both teams drawing on their extensive experience and technical expertise to complete the project in just over two months.

The Charity Farm installation will deliver enough clean, renewable energy to power more than 4,000 homes and will save 6,476 tonnes of carbon emissions each year – equivalent to taking 1,439 cars off the roads.

Nick Boyle, CEO at Lightsource, said: “We’re obviously delighted to add another successful project to our portfolio, which showcases the immense strength in depth shown by our in-house teams. Lightsource is a trusted partner and we have been able to show that we always deliver on our promises.

The project also clearly demonstrates the many benefits of solar energy, above and beyond the generation of clean energy.

“A truly competitive system is fair to all concerned, but there has been no new round of auctions announced for solar as yet and, if the UK is serious about the future of its energy security, it is important that this is addressed. Great strides have been made in the industry and we firmly believe that solar has a significant role to play in the overall UK energy mix.”

Kamal Khoury, Axpo UK’s Managing Director, said: “The relationship with Lightsource is an important milestone for Axpo’s renewables business in the UK. Lightsource has been a pioneer in Solar PV development, and we will look forward to increased cooperation amongst our respective companies.”

Craig Love, Director, Infrastructure and Structured Finance, RBS, said: “We are pleased that we were able to support this latest Lightsource project – the UK’s first CfD financing for solar energy generation. RBS has been at the forefront of the UK solar market since its inception in 2010 and has to-date arranged funding for solar farms able to produce more than 1.8GW of power. We have a strong pipeline of solar projects going forward and continue to focus on helping our customers in the UK and across Western Europe.”