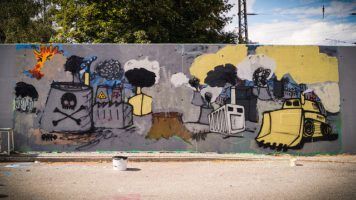 A new wave of artists are blurring the lines between activism and art by tackling climate change. As a channel of expressive freedom, art has traditionally been a method of communication between humans about the conditions of life. Many artists use the medium to explore controversial topics, voice their concerns and rebel against conformity. Take for instance Picasso’s politically-fuelled paintings of the Spanish Civil War and the provocative sculptures of Patricia Piccinini that challenge genetic engineering.

Global warming is perhaps the defining issue of our time – rising sea levels threaten entire populations, while a combination of extreme weather and agricultural deforestation is fuelling the largest mass extinction of species since the age of the dinosaurs. Many artists are creating work that spreads important messages about the environment to a wider audience.

More than 80% of people living in urban areas are exposed to air quality levels that exceed the limits advised by the World Health Organisation. Furthermore, around 7 million premature deaths each year are linked to exposure to air pollution. Many of the pollutants that are harmful to human health are also greenhouse gases that significantly contribute to climate change.

The cities with the highest levels of air pollution are often in developing countries like China and India. In Beijing, toxic smog regularly forces the closure of schools, factories and motorways. Performance artist Wang Renzheng has demonstrated just how bad the situation is by creating solid bricks from air pollutants in the Chinese capital.

In the Toxic Lanes of Your Cities, an installation created by contemporary multimedia artist Owais Husain, references the industrialisation and effects of globalisation on the environment in major Indian cities like Mumbai, Delhi and Bangalore.

Rivers and oceans are also becoming contaminated as a result of pollution and human waste. A group of Filipino artists are highlighting the decline of rivers in Manila by using an alternative approach to watercolour painting. After being sterilised and oven-dried for 24 hours, water samples taken from the most polluted rivers of the Philippines capital are turned into watercolour pigments suitable for painting.  The project aims to raise awareness of environmental degradation.

A recent survey found that more than one-quarter of Americans are sceptical about climate change. When asked why they doubt scientific evidence, the most common response was that they had not noticed a change in the weather around them. Seeing is believing, but waiting around to see the impact of global warming will leave little time to tackle the consequences.

The work of environmental artist Olafur Eliasson is designed to give viewers an accelerated preview of climate change consequences. In one installation, the Danish-Icelandic artist transported blocks of ice from Greenland to Paris, installing them in a circle at the Place du Panthéon.The ice was allowed to slowly thaw, mimicking the melting of the polar ice caps.

Environmental art can genuinely make a difference to the planet

While raising awareness about climate change is important, nothing will change unless people actually take action. That is why Belgian artist Naziha Mestaoui produces art that not only spreads a message of sustainability but also has a physical effect on the environment.

Her stunning digital project One Beat One Tree projects virtual forests onto city landmarks, blending the boundaries between nature and technology. Viewers are able to project personalised seedlings onto the work using a smartphone heartbeat sensor. The virtual greenery then grows and blossoms in tandem with the viewer’s heartbeat.

To further increase the fluidity between nature and technology, one actual tree is planted for every digital tree projected during each installation. These trees are planted in regions throughout the world, often in areas where ecosystems have suffered as a result of deforestation or natural disaster.