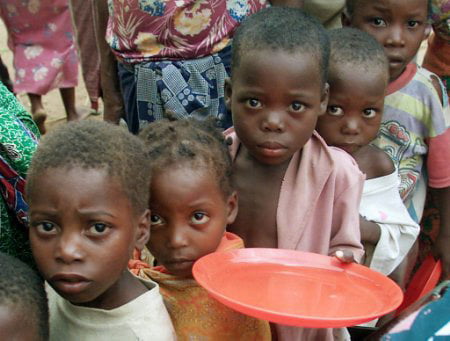 Some of the UK’s leading charities and a collection of the world’s most recognisable faces have lent their backing to a new campaign that aims to alleviate poverty worldwide by forcing strong governmental action.

The Fairtrade Foundation, Oxfam, The Salvation Army and Christian Aid, along with such individuals as Microsoft founder Bill Gates and actor Orlando Bloom, are among those to support Enough Food for Everyone IF – which is said to be the most high-profile campaign of its kind since Make Poverty History in 2005.

The group’s line of argument is that enough food is produced annually to feed everyone on Earth – despite the fact that one in eight people are currently living in hunger.

Published alongside the launch of the campaign is a policy report called Enough Food for Everyone IF: the need for UK action on global hunger, which outlines how the UK can lead the world in fighting poverty by investing in small-scale farms, nutrition and measures to tackle climate change that is making farming conditions in developing countries increasingly difficult.

The unveiling of the Enough Food for Everyone IF campaign comes a day after the UN General Assembly announced the formation of a working group to devise a set of sustainable development goals – one of which would tackle global poverty. The UN Food and Agriculture Organisation (FAO) had previously said that responsible investment in agriculture would see hunger reduced.

Meanwhile just last week, a report by the Institution of Mechanical Engineers outlined that between 30-50% of food produced around the world “never reaches a human stomach” – prompting calls for an improvement in the efficiency of food production.

The important campaign, which will be officially launched at London’s Somerset House this evening, highlights the 39th G8 Summit – being held in Northern Ireland in June – as key in initiating definitive action from the government.

“Hunger is not an incurable disease or an unavoidable tragedy. We can make sure no child goes to bed hungry”, said Archbishop Desmond Tutu, a supporter of the campaign.

“We can stop mothers from starving themselves to feed their families. We can save lives. We can do all of this, if we are prepared to do something about it. If we challenge our leaders to take action. If they listen to us.

“It’s time the world’s decision-makers came to the right decision on hunger. It’s time to end the unnecessary suffering caused by the failure of the current food system. We can make hunger a thing of the past if we act now.”

Visit enoughfoodif.org for more information and for ways to add your voice to the campaign.