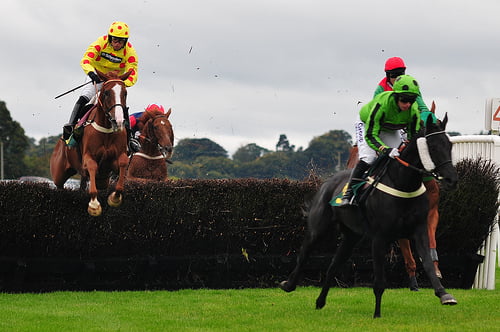 This afternoon, the horse racing calendar’s most popular event, the Grand National, takes places at Aintree. While millions use it as an opportunity to have their annual flutter, the event has received criticism from campaigners over animal welfare.

Since 2000, 11 horses have died after either falling at a fence or collapsing while running. Just this week, a horse suffered a fatal heart attack in a race on the opening day of the Aintree Festival.

And while the sport is always likely to draw controversy from animal rights groups, its appeal from a gambling perspective remains sky high.

As well as taking bets on the gee-gees, though, bookmaker Paddy Power has also created a slightly longer term market for climate change.

The first bet available revolves around whether or not 2013 will be warmest year on record. Climate News Network reports that the odds of winning this bet are 7/2 – meaning if you put £2 on, you get £7 back.

The second pot looks to entice punters with “the 2013 global average temperature anomaly”, which sees people bet on how much higher the average global temperature will be this year compared to the mid-20th century average.

Last year, we reported on how November 2012 was the 333rd consecutive month in which global temperatures were above the 20th century average, which might help you determine your wager.

Climate News Network also outlines how two Russian physicists, who were sceptical about climate change, bet $10,000 back in 2005 on the planet cooling down by 2015. Research says that temperatures have risen by 0.6 degrees from 1950 and will go on rising, so the pair are likely to be out of pocket in two years’ time.

But as is often widely reported, gambling can cause serious social problems. It can lead to addiction, with gambling addicts sometimes isolating themselves from the rest of society as a result, and it can even lead to suicide in some extreme cases.

That’s why ethical investors regard it as one of the so-called ‘sextet of sin’ – the six stocks that more enlightened investment strategies will historically tend to exclude, along with alcohol (brewing firm John Smith’s is the Grand National’s main sponsor), tobacco, pornography, armaments and nuclear power.