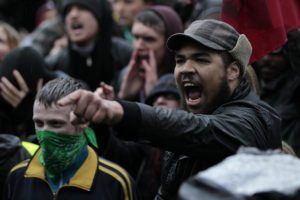 Angry protests will be held in India and Zambia next week in the run up to British mining company Vedanta Resources’ AGM at Ironmongers Hall, Barbican, London at 2pm on Friday 5th August. Inside the AGM dissident shareholders will ask questions submitted by protesting Zambian villagers who are suing Vedanta in the UK for twelve years of polluted water, as well as displaced farmers who were never compensated for their land in Lanjigarh, Odisha, India and accuse Vedanta of murdering and harassing them with state collusion. A loud protest organised by Foil Vedanta will take place outside the meeting, demanding that Vedanta subsidiary Konkola Copper Mines publish its hitherto secret annual accounts in Zambia, and accusing the company of pollution, human rights abuses and financial mismanagement in India and Afrika.

In the Zambian Copperbelt, 600 farmers, fishermen and former miners living downstream of Vedanta’s Konkola Copper Mines (KCM) held historic protests in their villages this week demanding an end to twelve years of pollution by KCM, which has turned the Kafue into a ‘river of acid’1 2 and left them with no access to clean water. They told KCM to de-silt and remediate the contaminated areas so they can return to normal life, and submitted a Memorandum of Complaint signed by Headmen of nine villages to be read at Vedanta’s London AGM. The villagers are also suing KCM and Vedanta to court in the UK for personal injury and loss of livelihood due to gross pollution, having won a precedent London jurisdiction hearing in May. An estimated 40,000 people in total are affected by contaminated water which also affects the municipal piped water system3.

One of the protesters and Fikolongo village headman Simon Mwila, who is also a claimant in the London case suing KCM and Vedanta said:

“Vedanta KCM has polluted our only water source since 2004. We feel weak and sick from drinking contaminated water and eating the fish but we have no choice. Relatives are dying mysteriously and we know it is the pollution. Each day they continue with impunity, cheating the government that they are controlling pollution but they are not. We want to live in peace, harmony and good health. KCM Vedanta must stop polluting us and clean up their mess!”

A number of scientific papers have documented the extent of contamination, with acid pH and heavy metal content regularly tens and even hundreds of times above legal limits.4 5 6

Justice Coulson’s judgement on the polluted villager’s jurisdiction case indicted KCM for financial secrecy, historic dishonesty and attempts to pervert the course of justice, revealing that KCM have never filed any annual accounts in accordance with the Zambian Companies Act, and referring to a 2014 London arbitration case against KCM in which three judges found KCM to be dishonest, obstructive and willing to cause unnecessary harm. An UNCTAD report published in July 2016 found ‘systematic export underinvoicing’ of copper from Zambia starting in 2005, the year after Vedanta took over KCM (Zambia’s biggest copper producer). $12 billion of underinvoicing is recorded between 1995-2014.7

Following damning audits of KCM in 2014, the Zambian government entity ZCCM-IH which owns 20.6% of KCM has also filed a case against KCM and Vedanta in London for $100 million owed on an April 2013 settlement8.

The UK government has repeatedly promoted KCM via the Department for International Development’s Commonwealth Development Corporation (CDC), most recently in 2012 when KCM were sponsors and speakers at their Jubilee Economic Forum in London alongside then Zambian President Michael Sata.9

In Chingola, Zambia more than 100 residents of Nchanga South will submit a petition to the press and the London AGM decrying the fumes and noise from KCM’s copper smelter, which is less than 50m from houses on East 1st Street, and demanding to be compensated and resettled as the 2006 Environmental Impact Assessment had required10. In Kitwe former KCM miners who have never received their terminal benefits will protest ahead of the next hearing in their ongoing case against KCM in the Zambia High Court on 8th August. 2500 miners were retrenched by KCM in November 2015, and have also been denied proper benefits, leading to riots11. Students at Copperbelt University in Kitwe are also expected to hold a solidarity protest.

Demonstrators in London will again demand that KCM publish its secret annual reports, claiming that Vedanta is hiding its tax evasion and capital flight, as well as shifting its liabilities onto the Zambian state. They will also demand justice for the victims of the 2009 chimney collapse which killed between 40 and 100 people.12The Sandeep Bakshi Judicial Commission report (leaked by activists in 2014) held Vedanta guilty of negligence in the incident but no action has been taken.13Samarendra Das from Foil Vedanta said:

“Vedanta has been found guilty of polluting the Kafue river and damaging communities livelihoods and health in Zambia. In India they are indicted for negligence in the country’s second largest industrial disaster at Korba in 2009, and have lost their iconic Niyamgiri mine due to popular resistance. The ground swelling protests in India and Zambia are demanding justice from the British Government to initiate an inquiry against Vedanta’s practices and delist them from the London Stock Exchange.”

In Bhubaneswar, capital city of the State of Odisha in India, a large group of protesters are expected in the streets on 5th August demanding that Vedanta is kicked out of its two Odisha bauxite operations at Jharsuguda, where ongoing pollution has led to farmers protests, and displaced people have never been compensated, and Lanjigarh (Niyamgiri) where local tribal activists and protesting land losers have been beaten, harassed and killed by police this year, under the pretence that they are Maoists. Fact finding teams led by former Chief Justice of Bombay High Court Justice B G Kolse Patil14, as well as the National Confederation of Human Rights Organisations (NCHRO) found state collusion between the police and Vedanta, who have been thwarted in their attempt to mine Niyamgiri’s bauxite by the people’s movement.

Padmanav Choudhury from Asarpada village, an active member of Niyamgiri Suraksha Samiti (Niyamgiri Protection Coucil) and a land loser yet to receive any compensation from Vedanta said:

“I was tortured for two days, hung upside down and thrashed by police for participating in a demonstration against police atrocities in Niyamgiri. Vedanta and the Odisha government are working together to deny our democratic and legal right to object to their mine. No matter what they do, we will not leave Niyamgiri or give up our fight.”

Despite a May Supreme Court ruling which rejected Vedanta and the Odisha state’s right to challenge the ban on Niyamgiri mining Mines Minister Piyush Goyal stated in July that he would again try to push the Niyamgiri project through.15 Mass demonstrations have again celebrated the Supreme Court victory this June.

“Lanjigarh must be shut down and stopped from causing pollution, misery, and landlessness in our villages. This a not just a local issue. It is a global struggle of the humanity to protect nature and civilisation.”

In Delhi, students from Birsa Ambedkar Phule Students’ Association (BAPSA) will hold a solidarity demonstration calling for an end to Dalit suppression by Vedanta in Niyamgiri and its other operations.

In London Foil Vedanta will warn shareholder that Vedanta Resources is bluffing them with grand claims of mergers and acquisitions to hide its toxic debt situation – with $8.6 billion of debt and $1.8 billion in intercompany loans16, amounting to debt of 7 times Ebitda17, and $2.9 billion in debt covenants due in 2016. They will point out that Chairman and 69.9% owner Anil Agarwal’s claims to have invested $4 billion in Africa18 have already been disproved by Zambian government audits which revealed the company had in fact failed to invest any CAPEX in the subsidiary since buying it in 2004, only reinvesting internally generated cash.19

In India, Vedanta’s attempts to assure shareholders and media that their attempted merger with oil subsidiary Cairn India is going ahead has been denied by top minority shareholder Life Insurance Corporation of India (LIC), who sent a recent public statement denying their approval20. The merger with Indian arm Vedanta Ltd, would give Vedanta access to Cairn’s $2.6 billion cash reserves. Meanwhile Agarwal has appealed to the Indian government to ‘monetise what is below the ground’, enabling speculation and advocating an oil boom comparable to Shale Gas in the US21, and a third CEO has quit Cairn India over differences with the Vedanta Resources board.22Cairn India is India’s biggest fracker at the Raageshwari deep gas field and has the world’s largest EOR polymer flood field at Mangala in Rajasthan, which injects 400,000 barrels of polymer liquid (water and chemicals) per day to extract oil in a drought ridden area.23