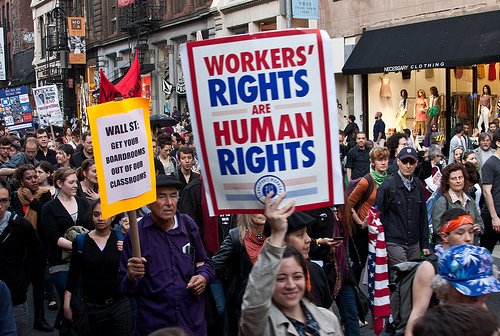 Today, more than 80 countries will celebrate International Workers’ Day – a campaign for workers around the world to receive fundamental human rights.

The event will be observed through marches, demonstrations, concerts and festivals on every continent.

In 1886, workers in Chicago were demonstrating during a general strike over the eight-hour day, when the police dispersed them after a bomb went off. Four protesters were killed in what is remembered as the Haymarket affair, and this episode is often commemorated on May 1 in the US.

Today, for most of people, International Workers’ Day is a day of celebration. It’s the time to commemorate the fights for decent wages, humane working hours and the right to safety and wellbeing in the workplace.

For workers in Europe, the eurozone crisis represents a worrying situation. Unemployment rate has risen by 4% since 2007, while 23% of people under 25-years-old are without a job.

Meanwhile, women are still largely excluded from many top boardroom positions in the developed world – despite the fact that research by McKinsey & Co shows that companies tend to perform better with greater female presence in high-ranking jobs.

It remains, however, that the worst scenarios are in the developing world. The recent factory collapse in Bangladesh, a country where children are often forced to work from a very young age, showed the scale of human rights problems.

A recent Oxfam report outlined the extent to which farmers were paid unfairly for their work by large multinational companies – most of which are household names. The need for fair and ethical trade has never been more urgent.

Despite this, the labour movement has undoubtedly reached important goals in recent years – with the growth in Fairtrade-certified products and the ethical consumerism market more generally. There is still a long way to go in the fight against global injustice, though.