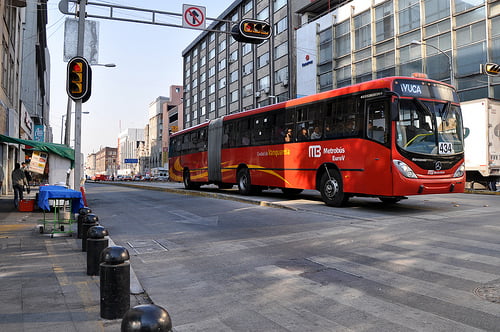 Mexico City’s dramatic transformation of its transport network has seen it recognised with the 2013 Sustainable Transport Award by a panel of global experts.

The award, which was handed out by the Institute for Transportation and Development Policy (ITDP), rewards the Mexican capital over its improved bus rapid transit (BRT) system and its rejuvenated cycling, walking and parking infrastructure.

“Mexico City was like a patient sick with heart disease, its streets were some of the most congested in the world”, said Walter Hook, CEO of ITDP.

“With the blood flowing again, Mexico City’s urban core has been transformed from a forgotten, crime-ridden neighbourhood into a vital part of Mexico City’s future.”

Bremen, Germany; Lviv, Ukraine; Rio de Janeiro, Brazil and Rosario, Argentina were among the other candidates for the 2013 edition, only to be beaten at the finish line by Mexico City, which organisers hope will now go on to inspire other places to develop sustainable transport networks.

“Mexico City’s success has proven that developing cities can achieve this, and we expect many Asian cities to follow suit.”