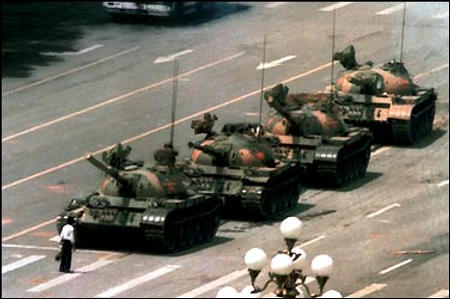 On this day in 1989: Tiananmen Square pro-democracy protests

On this day 25 years ago, the Chinese Communist party sent 200,000 soldiers to suppress a peaceful student-led demonstration calling for political reform. The move caused numerous casualties among the demonstrators, led to a crackdown on other protests and placed strict restrictions on the media.

Pro-democracy protesters went to Tiananmen Square in Beijing to take part in the funeral ceremony of former Chinese Communist party general secretary Hu Yaobang, who was also a liberal reformer. Some six weeks later, protesters still occupied the square when the military was mobilised. Estimates of the resulting fatalities range from a few hundred into the thousands, and the democracy movement was crushed.

Many people, both in China and globally, argue that the Chinese government continues to use force in order to remain in power and restrict human rights. Over the last few days, Google has been largely inaccessible to Chinese citizens in what is thought to be an act of censorship.

According to Amnesty International, Chinese authorities have attempted to suppress those seeking to commemorate the 25th anniversary of the event and detained at least 66 people in connection with it.

William Nee, China researcher at the organisation, said, “The past few days have seen the Chinese authorities ratchet up the repression. They appear willing to stop at nothing in their attempts to prevent people from marking the 25th anniversary of the Tiananmen crackdown. They have gone further when compared to previous years.”

The government’s actions in regards to the anniversary raise one important question – in 25 years, has China progressed in terms of democracy?

How do we make sustainability democratic? Get a vision

If we voted for policies at elections, and not parties, the results might surprise is all

To create a sustainable democracy, we need greater transparency on policies