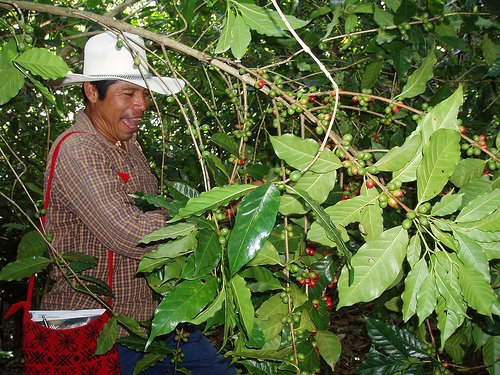 Reflecting on international workers’ rights: May Day and Fairtrade

May Day, Labour Day, International Workers’ Day—whatever label you prefer—has evolved from humble yet fundamental origins into an anti-capitalist opportunity for some and more recently borrowed by the Occupy movement. Yet, it could more constructively be a time to reflect on year-round efforts on the behalf of global workers by The Fairtrade Foundation.

At May Day’s centre, is the a call for fundamental workers’ rights and the eight-hour day movement, which harks back to 1817 and Robert Owen’s slogan, “Eight hours labour, Eight hours recreation, Eight hours rest”.

International Workers’ Day was historically a celebration and a national holiday for many. But fast forward very quickly to modern day, and the focus is on protest. A recent Occupy statement said: “The Occupy Movement has called for A Day Without the 99% on May 1st, 2012”,  which refers to its base belief that “We are the 99% that will no longer tolerate the greed and corruption of the 1%”. But, in reality, it is only by engaging positively and intelligently with the 1%, many of whom are some of our most regular readers, that real and necessary change will occur.

No doubt global protests will provide much fodder for mainstream news outlets. And, in fact, more responsible and sustainable investment banking around the world would undoubtedly have a huge and positive impact on a fairer distribution of wealth, much to the liking of many international workers.

However, there is one organisation for which May Day will pass by relatively unnoticed as it continues to proactively manage the very same issues reflected around the world—The Fairtrade Foundation. Fairtrade, in its simplest terms, covers “better prices, decent working conditions, local sustainability, and fair terms of trade for farmers and workers in the developing world”.

The Fairtrade Foundation really struck a chord with Blue & Green Tomorrow recently when it announced plans, to little fanfare, for the Fairtrade Access Fund.

The new scheme will give loans and technical support to Fairtrade farmers by creating an innovative partnership between a social investment firm and two not-for-profit organisations.

As is so often the case, a lack of investment or inability to access credit is a stumbling block for progression. A recent survey by Fairtrade International found that more than half of Fairtrade farmers in Latin America, for example, require long-term investment to improve their business infrastructure.

Small companies in the UK and much of the developed world, and especially during the current economic downturn, will understand the difficulties in securing finance from mainstream banks that consider them too high risk. And the problem is significantly worse for smallholders in developing nations. And while protesting about the activities of the mainstream finance sector does have an impact, creating structures to support those in need is also important.

To that end, Fairtrade International, Grameen Foundation and Incofin, a social investment firm, have developed a unique fund that gives farmers access to the long-term loans they need to improve their farms by implement new technologies to drive efficiency. The fund will also help deliver business, crop management and market information through mobile phone networks in a breakthrough service.

Starbucks have guaranteed the fund a good start with the first £1 million, but the hope is to reach a launch size of £5-7.5m, rising to £15m by the end of the second year.

Irresponsible and unsustainable investment practices are at the heart of many of humanity’s ills. And though the activities of Occupy and Fairtrade are worlds apart, the objectives are surprisingly similar.

Buy Fairtrade products, consider switching to a more responsible bank and read our new Guide to Sustainable Investment, and you’ll most likely be able to enjoy a trouble-free yet proactive May Day.