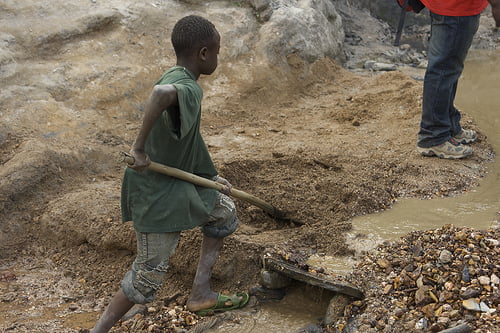 A group of students from the US have urged three prestigious universities to strengthen their investment policies regarding minerals extraction in the Democratic Republic of the Congo.

Students from Yale, Brown and Dartmouth launched the appeal to their institutions because of their worries about human rights abuses in mining operations in the east African state.

In a statement, they say that universities should improve their investment policies to make sure they aren’t funding companies that are involved in the extraction of minerals used for technological devices.

Mining, the students say, is a huge source of income for armed groups that are involved in human rights violations and recruiting children as soldiers.

The statement adds, “Since universities are major institutional consumers of and investors in electronics, they are well positioned to stand behind electronics companies that source responsibly from Congolese mines— or to consider withdrawing support in instances where companies turn a blind eye.”

The students claim more than 150 campuses around the world share the same concerns about minerals coming from Africa.

Harvard University students launched a wide campaign in 2012, calling for their institution to remove the $30.7 billion they have invested in fossil fuels and reinvest it in socially responsible funds.

“Higher education institutions like Harvard exist as investments in the future for their students and their countries”, the group, Divest Harvard, said at the time.

“Yet, while investing in our future, Harvard simultaneously invests its money in corporations that threaten our future and that of our country by causing the climate crisis.”

The campaign is supported by 350.org, the organisation founded by environmentalist Bill McKibben, who told Blue & Green Tomorrow in April that “divestment is the answer” when it comes to fossil fuels.

In January, an online petition called on Canadian magazine Maclean’s to include an ethical investment section in its annual university guide, in the hope that that it would inspire institutions to review their policies.