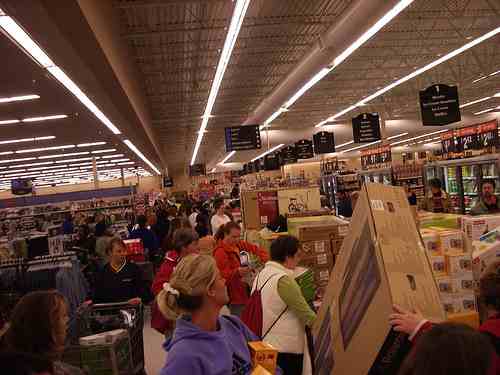 Black Friday, the Friday after Thanksgiving Day that is widely renowned as the first day of Christmas shopping, has already seen several people fighting over purchases at America’s most famous retailer.

A number of people tweeted that they had got involved in disputes over domestic appliances and technological gadgets at Walmart, as soon as Black Friday began.

One woman said she saw people fighting over a $29 tablet, while another posted a picture of an ambulance coming to the shop. Someone else posted a video of a crowd of people running and jostling to catch the items that were on sale at the best prices.

The day after Thanksgiving celebrations is well known for the shopping fever that takes over many Americans, who run to the shops in search of deals.

Over the past few years, the festivity has prompted some large retailers to open at midnight on Thanksgiving.

Despite representing a large source of income for many big stores, Black Friday often comes with its troubles, as assaults, shoplifting and even shootings are known to have taken place on the day.

Last year, two people were shot in Florida during a dispute over a parking space, while in 2011 a woman used pepper spray on other customers to grab an Xbox360 first.

A number of apps have been developed to notify customers when certain products hit their best prices, or which shops are likely to launch offers.

Critics of the wave of consumerism that takes place on Black Friday launched the Buy Nothing Day back in 1997, as a way of raising awareness of the issue of over consumption and waste. The event, which takes place on the same day of Black Friday, has been renamed Occupy Xmas.

A different campaign called Shift your Shopping calls for a more responsible shopping to drop large retailers in favour of local and smaller businesses, while in 2012, fair trade non-profit Global Goods Partners launched Fair Tuesday as an ethical alternative to Black Friday. The 2013 event is set to take place on December 3.

US Thanksgiving: talking turkey about sustainability