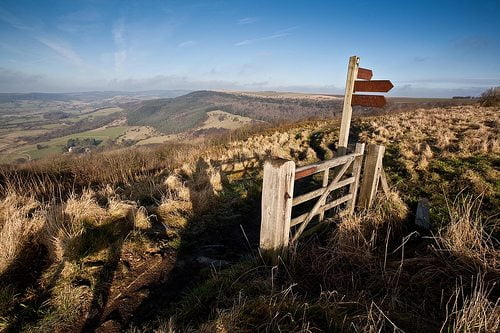 The Cleveland Way is a National Trail that runs through ancient Cleveland in northern England. It was opened in 1969, becoming the second official National Trial.

It is 110 miles long, skirting the heather moorlands of the North York Moors national park and taking in the sights of North Yorkshire, passing old fishing villages and coastal towns.

Parts of the trail tour through the moorland habitat of species such as red grouse and curlews. The coastal sections offer sightings of sea birds such as Great Cormorants, Shags and Puffins.

It is also a path rich with history. The path passes by highlights such as Helmsley Castle and Captain Cook’s historical towns such as Whitby, famous for its abbey and for inspiring Bram Stoker while he was writing a certain story called Dracula. Even the trail’s wild and remote moorland landscape hides an industrial past. Alum, ironstone and jet were mined throughout the area.

The peaceful coastal villages, meanwhile, conceal a darker history. In the 18th century, the fishing villages provided an ideal landing spot for smugglers trading in tea, salt and spirits. Robin Hood Bay, in particular, was notoriously popular with the devious lawbreakers.

If you live near the Cleveland Way and are interested in ethical investment, read The Guide to Sustainable Investment 2013 for more information, and The Guide to Ethical Financial Advice 2013 to find a specialist ethical financial adviser near you.