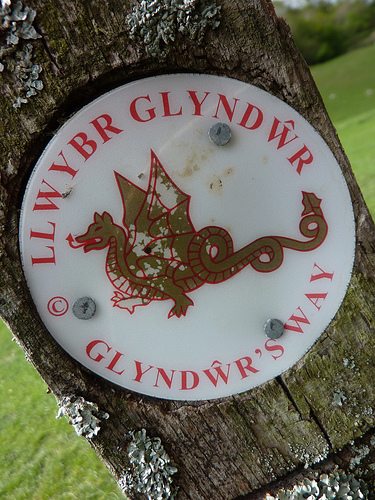 Glyndŵr’s Way, or Llwybr Glyndŵr in Welsh, is a 135 mile national trail that runs in an extended loop through the county of Powys.

The path begins at the eye-catching market town of Knighton on the English border, meandering through the open moorland, rolling farmland and woodland of Mid Wales, ending by the Montgomery Canal in Welshpool, and was awarded national trail status in 2000.

It boasts some of the finest scenery in Wales, with breathtaking views of Lake Vyrnwy, the mountain range of Cadair Idris, the Cambrian Mountains and Y Golfa’s peaks.

The trail derives its name from the fifteenth century prince and folk hero Owain Glyndŵr. Glyndŵr had been a squire to the English nobility, fighting for the English army abroad.

However, when disorder broke out Glyndŵr, disillusioned with the crown after an associate of the King took his land and the courts only demanded that he concede more, was accused of treachery and subsequently proclaimed by a band of rebels to be the Prince of Wales.

Glyndŵr led a long, bloody uprising, using the ancient tracks and remote landscape that is now navigated by the national trail to wage guerrilla war. By the end of 1404, he controlled most of Wales, establishing the first Welsh parliament in Machynlleth, one of the towns the trail runs through.

However, by 1410 the rebellion had been defeated, and Glyndŵr was forced to go on the run, mysteriously disappearing from history, but forever remaining an icon of Welsh culture.

If you live near Glyndŵr’s Way and are interested in ethical investment, read The Guide to Sustainable Investment 2013 for more information, and The Guide to Ethical Financial Advice 2013 to find a specialist ethical financial adviser near you.