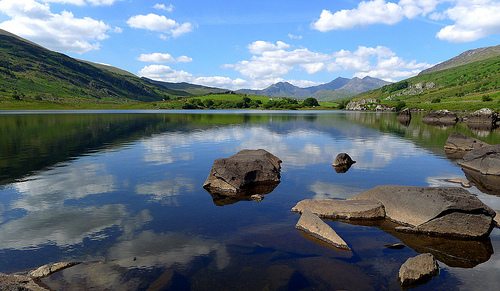 Snowdonia, or Eryri in Welsh, is a region in North Wales and a national park of 823 square miles in size. It was the first national park to be designated in Wales and the third in Britain.

The region’s English name hails from its most prominent feature, Snowden, the highest peak in Wales at 3,560ft.

The park is home to more than 26,000 people, and attracts over 6 million visitors annually; making it the third most visited national park in England and Wales. Much of the area is protected by European law as a special area of conservation, as it is home to rare species such as otters, polecats, ospreys and merlins.

Click here to find a cottages4you property in Snowdonia

It boasts several historic towns and landmarks, such as Harlech Castle with its exceptional views of sandy Cardigan Bay. In the nineteenth century the now unassuming market town of Dolgellau was even at the centre of a minor gold rush, when gold was discovered in the hills. Since 1923, gold from the Clogau gold mine in Bontddu has been used to make royal wedding rings.

Snowdon is also an area rich with legend. Several tales have placed the fabled figure of Arthur, King of the Britons, and his legendary exploits in the misty mountains of Eryri. That Arthur ever existed is highly questionable, but there can surely be no better setting for the folk tales that surround him.

One describes how Arthur met a giant, named Ritta, while riding on the slopes of Snowdon. Arthur remarked upon Ritta’s unusual cloak, which the giant explained was made from the beards of kings. Ritta asked if he might take Arthur’s beard to add to his collection, but the king, reluctant to part with his facial hair, refused. A fight ensued and Arthur slew the giant, burying him under a cairn at the mountain’s summit.

However, none of Snowdonia’s less mythical features are as famous as its namesake. In 1639, the botanist Thomas Johnson wrote the first known account of an ascent of Snowdon, describing how he “sat down in the midst of the clouds”. Reaching the top remains a challenge, although if you really must cheat, the summit has now also been conquered by railway.

In 2009, Hafod Eryri, the new visitor centre on the summit of Snowdon, opened its doors to the public. It receives over 350,000 visitors every year. From the summit, on a clear day, you can see as far as Anglesey, Pembrokeshire and Ireland.

If you live near Snowdonia and are interested in ethical investment, read The Guide to Sustainable Investment 2013 for more information, and The Guide to Ethical Financial Advice 2013 to find a specialist ethical financial adviser near you.