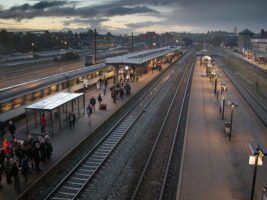 The Government’s announcement of an increased £20 million investment to fund new rail stations has been welcomed by Campaign for Better Transport.

Today’s announcement is the second round of the Government’s New Stations Fund which will provide up to 75 per cent of the cost for construction of new stations or to reopen previously closed stations in England and Wales. The deadline for bidders for this round of funding is 18 November 2016 with an announcement of successful projects expected to be made early next year. The first round helped fund stations at Lea Bridge in London, Ilkeston in Derbyshire, Newcourt in Devon, Pye Corner, Newport and Kenilworth near Coventry.

“Another £20 million towards new rail stations could be great news for thousands of people and we look forward to seeing what projects win funding. Fifty years after Dr Beeching closed a third of the network, the successful New Stations Fund shows that communities up and down the country are clamouring to get back on track.

“The challenge now is to build a railway that meets the growing demand to travel by train. That means reopening lines as well as stations.”