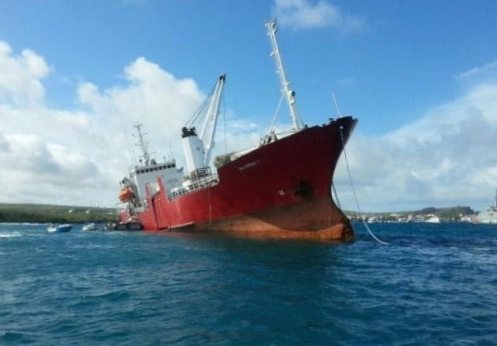 Stranded Galapagos oil tanker ‘does not represent an environmental risk’

A freight ship carrying 60,000 litres of oil has become stranded off the coast of the Galapagos Islands after running aground. Authorities have said that “for the moment”, it does not pose a threat to the surrounding environment.

The Ecuadoran vessel became stranded on Friday off the coast of the island San Cristobal. After an inspection, authorities have said the oil was not at risk of spilling from the tanker.

Inspectors have “confirmed that the part of the vessel that is on the rocks is distant from the fuel tanks.”

“So for the moment it does not represent an environmental risk,” they added. They also said that contingency plans were being drawn up to mitigate the potential catastrophic impacts of a spill should that situation arise. The vessel is believed to be carrying around 16,000 gallons (60,000 litres) of diesel and crude oil.

The nearby Galapagos national park said that it was monitoring the situation. The coastguard is believed to be co-ordinating efforts to offload some of the cargo of the ship in the hope that a high tide will lift it from the rocks.

Back in 2001, another oil tanker ran aground, but the resulting leak of around 180,000 gallons of oil was estimated to have killed around 62% of the marine iguana population on a neighbouring island, after the ship’s captain admitted to making a “navigational error”.