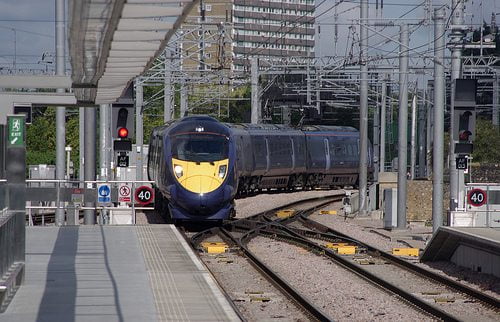 Leading Japanese engineering and electronics conglomerate Hitachi has revealed plans to move the headquarters of its global rail business to the UK.

The firm hopes that relocating from Tokyo to London will help it develop its market in Europe and pursue contacts for projects such as the planned HS2 rail line.

The move will also follow the opening of a new factory in Newton Aycliffe, County Durham, next year, where Hitachi will create the next generation of inter-city trains in a £1.2 billion deal.

The firm says that it plans to increase the number of its UK-based staff from 200 to about 1,800 over the next few years, without uprooting large numbers of staff from Japan.

“Today’s announcement is a significant sign of intent by Hitachi to grow its business in the rail market”, said Alistair Dormer, chief executive of Hitachi Rail Europe.

“Both the UK and Japan remain important as markets for Hitachi Rail, and with our train factory in the north-east of England now under construction, we will work to realise our export potential from the UK, expanding into Europe and emergent markets.”

The company, which developed the ‘Javelin’ trains that run on the HS1 route from London St Pancras through Kent, said it would also bid for contracts relevant to HS2.

Patrick McLoughlin, transport secretary, said, “This is an incredible vote of confidence in a growing Britain that is exporting more and making great things once again.

“Nothing says that better than the company that built the first bullet train putting its HQ here to sell abroad, alongside a new factory and new jobs in northern England.”