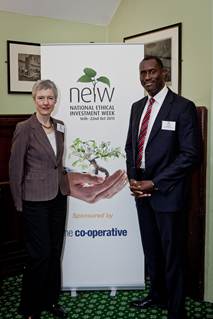 Martin Stewart, managing director at Stewart Investment Planning, spoke to Alex Blackburne about how a “strong inner-battle” between his work and his beliefs guided him naturally, to ethical investment.

Martin Stewart, managing director at Stewart Investment Planning, spoke to Alex Blackburne about how a “strong inner-battle” between his work and his beliefs guided him naturally, to ethical investment.

For Martin Stewart, it was his personal beliefs that drew him to the water.

“There came a point in my career, around the late nineties, when I felt quite negatively consumed in the money business and the linked material world, whilst at the same time I was personally searching for the ‘meaning of life'”, Stewart says.

“I felt a strong inner-battle between the work that I was doing and my spiritual self, and this drove me to research and explore the ethical investment sector, gradually aligning and developing my business model to where it currently is: specialising in green and ethical investments whilst also delivering a comprehensive financial and lifestyle planning service to private clients.”

Stewart is the managing director of his own company, Stewart Investment Planning – ethical independent financial advisers covering the Bristol area.

Having joined the financial services industry as a tied agent at Guardian Royal Exchange Financial Management in 1991, Stewart was headhunted (or “saved“, as he jokes) just seven months into working there by a professional investment firm that offered independent financial advice to private clients.

“They provided me with an excellent mentor and an environment to develop my career“, he explains.

“After being awarded their best new associate of the year in 1992, I decided that I knew it all, and left to launch Stewart Investment Planning in January 1993.

“Eighteen years later, I am proud to still be here along with the fact that some of my earliest clients are still with me today, although the business itself is very different.”

Aligning your life goals and your finances

Stewart Investment Planning provide fee-based advice to clients, “to ensure full transparency and to remove any possible element of bias or doubt”, according to Stewart.

Speaking from his own experiences with regards to how he initially got involved in the industry, he explained the importance of talking to an expert about your finances.

“Comprehensive financial planning involves working out what’s most important to you and your goals in life. Then, by adding timescales and costs, you can work out how to get where you want to be by planning your finances accordingly.

“At the same time, our planning process considers your green and ethical needs and objectives to ensure that the financial plan outcome is fully aligned to it.”

When it comes to ethical investment specifically, though, Stewart is keen to point out that, as a financial adviser, he’s not here to pass judgement as to why people aren’t investing their money sustainably.

“I do not judge people if they choose not to invest ethically”, he says.

“It’s often a lack of knowledge and awareness, along with false myths about green and ethical investing that can put potential investors off and for this reason I do invest time sharing introductory information with those who express some interest in knowing more.”

Stewart’s words emphasise the seemingly widespread belief amongst UK ethical financial advisers, as we’ve seen in this series of features alone, that the public aren’t aware of the choices often right in front of them.

The main myths surrounding ethical investment are also a factor as to why people are often put off choosing to invest responsibly.

“A common false myth is that you have to sacrifice performance”, Stewart explains, “but this is no longer true.

“90% of wealth managers surveyed in the summer of 2009 said that their green and ethical portfolios performed as well as, or better, than their other [unethical] portfolios.”

‘Economics as if people mattered’

Now common practice in Blue & Green Tomorrow interviews with ethical IFAs, I asked Stewart who he would choose to be paired up with if he was stuck on a desert island, and his answer was one of the most thought-provoking yet.

“Right now, I would choose Dr E. F. Schumacher, because I have recently attended the Schumacher Centenary Festival held in my home city of Bristol, and it was an incredibly uplifting experience to listen to and meet so many people of whom he has inspired, helping them to rethink their values, goals and lifestyles.”

Ernst Friedrich Schumacher, better known as Fritz, was a German economist and philosopher, and author of influential publications such as Small is Beautiful (1973) and The Guide for the Perplexed (1977).

“He had a fantastic mind and spirit“, Stewart states.

“He was the embodiment of wisdom and pragmatism and believed that economics was a means to an end – its true aim was to enable people to live peacefully within themselves, with their fellow human beings of all races, religions and nationalities.”

Indeed, Small is Beautiful, which has the rather poignant sub-heading of ‘Economics As If People Mattered’, and many of his other titles, also had sustainable development themes. In the book’s epilogue, Schumacher comments on the growing need for control over “mankind’s population and consumption of resources“.

“Unless this is done”, he writes, “sooner or later – and some believe that there is little time left – the downfall of civilisation will not be a matter of science fiction.

“It will be the experience of our children and grandchildren.”

This outlook might sound grim, but it’s true. Ethical investment is one of the most effective ways to fight this kind of future.

The Stewart Investment Planning website has a ‘daily comment’ that changes every day. On the day that I’m writing this feature, the comment could not be more appropriate when it comes to ethical investment.

“Let good counsel and common sense be your characteristics”, it says.

The good counsel comes from the UK’s ethical IFAs – people like Martin Stewart. The common sense is very much down to you.

If you would like to know more about ethical investment, then contact Stewart Investment Planning, or complete our form and we’ll connect you with a specialist ethical adviser.

Stewart Investment Planning is based three miles outside the heart of Bristol city centre, in the beautiful Leigh Court business centre.

Surrounded by parkland views in a relaxed stable courtyard office, it neighbours a local farm project growing organic fruit and vegetables, and is away from the hustle and bustle of city life.

Arguably the most famous pirate in history – Blackbeard – is presumed to have grown up in the city.

Bristol is at the forefront of the UK’s sustainable movement and is a base for many leading groups and organisations, including Sustrans, the Centre for Sustainable Energy and Bristol Friends of the Earth.

The Schumacher Institute, also located in Bristol, and named after Martin Stewart’s personal influence, Fritz, have set up a Green Roots programme. Its aim is “to document and thus conserve Bristol’s history of sustainability and environmental action before the information, personal and collective histories, documents and evidence of action was lost and forgotten“.

The city’s determination to become more sustainable and eco-friendly has paid off in its carbon emission figures over recent years. In 2009, the City of Bristol local authority produced 2,122kt of carbon dioxide, compared to 2,515kt five years earlier in 2004.

Per capita, the local authority produced 4.9t of carbon dioxide – a reduction of 1.3t since 2004.

In 2008, Bristol was named as Britain’s most environmentally sustainable city. Long may it continue.