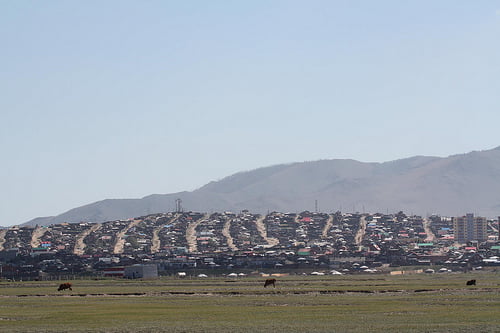 Ulan Bator, the capital city of Mongolia, is set to undertake a unique trial experiment which is hoped will tackle the effects of global warming. Alex Blackburne has the details.

With a dense population of just over 1.1m, the city of Ulan Bator, located in a valley near the Tuul River in central Mongolia, is the country’s biggest city by over 13 times. As the city becomes increasingly urbanised, the effects of global warming are beginning to peek through the cracks.

Boasting one of the most variable climates in the whole of Asia, and with the lowest average temperature of any national capital city in the world (-2.4°C), Ulan Bator’s government is set to take innovative steps as Mongolia fights climate change.

The country is to pioneer one of the largest-scale ‘ice shield’ experiments the world has ever seen, in order to conquer the increasing dangers derived from the urban heat island effect.

This is the notion whereby an urban area has increased temperatures in comparison with its rural surroundings, and for Ulan Bator, it’s becoming a progressively real threat.

The ‘ice shield’ experiment, aims to produce ‘naleds’ – thick layers of ice formed when ground water freezes in consecutive sheets, until it covers a vast area.

Mongolian engineering firm, ECOS & EMI, will attempt to artificially create this process by drilling holes into ice formed on the Tuul River. This procedure will then be repeated regularly to create the ‘naleds’, or ‘aufeis’ (“ice on top”) as they’re known in German.

If successful, the Ulan Bator government hope that other northern world cities will be able to follow their example in an attempt to globally reduce the urban heat island effect.

However, whilst Mongolia is at the forefront of this positive movement, the country is also leading the way in coal extraction in its scarce, vast plains – a lucrative but environmentally-harmful process labelled ‘mega-mining’.

Campaign groups in the country have expressed their caution over the project, stating that the massive complex and endless stream of 100-tonne trucks are ruining a once peaceful, serene and, more importantly, plentiful area.

If you would like to find out more about investing in climate change-tackling technology, ask your financial adviser, if you have one, or complete our form and we’ll connect you with a specialist ethical adviser.

The opposite ends of China’s cleantech growth

Ethical insurance: protection for the days when it goes wrong